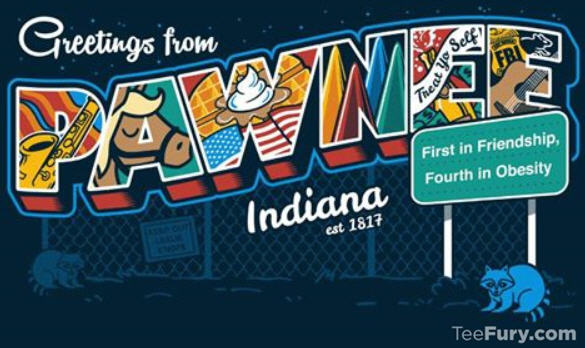 Though I will admit to a false start penalty, I was somehow able to avoid immediately adding my voice to the four corner chorus singing the praises of the Parks and Recreation finale, and of the series in general, this week. I read a few of the pieces and found them all fine, but I wasn’t ready to chime in just then, even though I knew I’d be unable to resist long term. Instead, I made a point of watching “One Last Ride” again. Then I recalibrated, did some pondering, and restarted in earnest. Since I officially entered the review business over a year ago, I’ve found I very rarely watch new shows or movies a second time before commenting on them. This week, I’ve already done it twice. One of the downfalls of loving movies in the theater, where I always think of myself as a consumer first, or of making spontaneous decisions on when or what to see, is that such predilections don’t often enable or lend themselves (in terms of the review) to thorough detail or particularly considered analysis. I’ve learned to live with that in some regards and tried to work around it in others. I purposely rewatched Kingsman: The Secret Service on Monday because I worried I’d forgotten some of its fun detail in the interim, and figured I could stand a refresher. However, I watched “One Last Ride” a second time on Wednesday night because, as I only learned during the experience, I simply wasn’t ready for Parks and Recreation to end.

Oh, how I’ll miss Pawnee. Pawnee, whose slogan for years was “First in Friendship, Fourth in Obesity”, the home of Sweetums, Tom’s Bistro, and Paunch Burger, birthplace of high school basketball legend “Pistol” Pete DiSellio and beloved miniature horse Lil’ Sebastian. Pawnee was also the town where local history enthusiast Garth Blundin (Patton Oswalt) once protested a minor amendment to the town charter by unleashing a multi-hour filibuster in which he proposed a ridiculously ambitious, semi-comprehensible Disney/Marvel/Star Wars crossover event as the plot for Episode VII. Over the course of seven seasons, Parks and Recreation creators/executive producers/ showrunners Michael Schur and Greg Daniels, along with star/co-writer/muse Amy Poehler, turned their fictional Indianan hamlet into one of the great singular settings in television history – sort of a modern-day Mayberry, only far weirder and more dependably outraged, or a comparatively restrained Springfield, except folksier and minus the (overt) animation, though they pretty much nailed the scatterbrained, disgruntled citizenry. Pawnee is a sneaky wonderful achievement, a locale so absurd it could probably only spring from a writer’s room that nevertheless engenders a sense of warmth, pride and specific place – merely convincing at first, though, eventually, completely enveloping – indicative of the elusive small town ideal so many of us subconsciously carry in our hearts. Yes, loonies and all.

But Pawnee only ever got its extended spotlight because its city planners took the care and had the foresight to populate its center with people we grew to care so much about. Parks and Recreation is surely one of the best traditional “workplace” comedies (ala Taxi or The Office) ever, though by virtue of its many evolving, thoughtfully cultivated interpersonal relationships and overwhelming depth of good feeling, I think it lays as much claim as any to the mantle of being a classic “hang out” comedy, ala Cheers or Friends. This inability to neatly pigeonhole Parks reflects its sustained quality. To my thinking, Parks was always a bit more about “being” than “doing” – the characters actually subtly pick sides in the debate (April vs. Leslie, Tom vs. Garry, Ron vs. everyone…depending on his mood) – yet, by that reckoning, it may also go down in television history as the “hang out” comedy in which the most tangible work was accomplished. Perpetually bright-eyed civic government warrior and true believer Leslie Knope (Poehler, doing career-defining and, perhaps, genre-redefining comedic character work throughout) might be a pain in the neck, but it’s nigh impossible to question the purity of her motives, or the all-consuming passion (for her hometown, for her dear friends, for service and her constituents, for uncorking ambitious plans, for marking milestones both grand and obscure, for binder organization, and, above all, for waffles) that undergirds her every move. Knope is both the mechanism that so often sets all Pawnee spinning manically around her, and the center of gravity that keeps it from ever flying apart.

Following in the footsteps of the no fewer than three previous Parks episodes that could comfortably have functioned as an impromptu series finale had fickle NBC decided to pull the plug, Tuesday’s hour-long (actual) series finale takes its cues from the painfully abbreviated season it’s capping. Season seven, which jumped from present day to 2017 in an attempt to freshen up the proceedings and provide a more fitting endgame, certainly had its moments (Donna’s wedding [to Keegan-Michael Key], Andy’s bittersweet farewell to the Johnny Karate Super Awesome Musical Explosion Show, and, most importantly, Ron & Leslie’s reconciliation after several episodes spent as foes) but didn’t quite resonate to the degree seasons 2-5 did. A lot of that had to do with the reduced episode order (13 from the standard 22) and NBC’s determination to burn its remaining daylight in hour-long chunks instead of spreading the wealth out over several months. Still and all, Parks accomplished a lot in its waning days, securing new jobs, new destinations (including, inevitably, Washington, DC), new loves and new possibilities for its cast, and luxuriating in the relationships they shared. For once, the A-stories generally were pointless, except to the degree they illustrated the delicious dysfunction, previously only the stuff of legend, of Donna’s family (including cousin Ginuwine and estranged brother Questlove from The Roots), or underlined once again the sweet, benevolent, daydream craziness of man-child Andy, or got warring polar opposites Ron and Leslie back into a locked room together, whereby they were dancing, delirious friends of old by the time the sun rose.

“One Last Ride” begins with Leslie leading the assembled group on a final coerced trip down memory lane before everyone leaves town, though a three-month old complaint about a local park’s broken swing set turns her attention in a heartbeat from reminiscence to civil service. Leslie’s determination to solve the swing set issue, despite the fact that neither she nor any of her old crew even work for the Parks Department anymore, sets her off on a series of excursions (to the fabled “fourth floor”, to Maintenance [closed on Sundays], to the Mayor’s office) paired with one or two of her old co-workers at any given time. As they walk, Leslie can’t help gushing over how proud she is of what they’ve accomplished, or the type of person they’ve become, and, upon their inevitable embrace, the show flashes forward between another 5 and 31 years to reveal and contemplate their specific futures. It’s a terribly fun conceit and a gift to the fans, a cop out in a way, sure, but utterly perfect in so many others. The few contrarians who’ll grumble about Parks ending in such an overly conclusive manner are probably the same ones that groused the show was spinning its wheels with underdeveloped detours (Leslie’s recall, the Unity Concert) in later years. Now, as then, their complaints are basically pointless. Having spent six seasons – or, really, closer to five, since the show’s introductory chapters were too tightly wound to approach cruising altitude – accomplishing applause-worthy world building and nuanced, joyful characterization, the Parks brain trust invested another eleven episodes in mostly solving its principals’ nagging problems and laying the groundwork for pretty great futures across the board. Why not dig just a bit deeper on the way out, instead of taking a more standard victory lap or making the final bit of plot out to be more important than it is? We love these people. We want to know these people (and Jean-Ralphio) are okay, and for the most part, they sure are. Though the question remains: Who made out the best?

[SPOILERS] Well, the Ludgate-Dwyers happily add to their team while still retaining their essential sweet oddness. Their son’s nickname, Jack, is actually short for “Jack O’Lantern”, which, in turn, is short for something else much more blissfully macabre. Tom marries Lucy, and his typical stubborn refusal to accept failure (though he’s terrific as ever at wallowing in it) leads, almost accidentally, to his greatest success. Donna’s own professional success allows her to treat herself yet again, this time by selflessly treating her man, which surely qualifies as personal growth. Ann’s son already seemingly has a thing for Leslie’s daughter, or at least he will if the moms have any influence in the matter. Leslie and Ben both scale and attain their own political heights (senatorial terms, governorships, honorary doctorates, selective geek cred, and maybe even more?) while remaining the definition of a loving, supportive couple. Garry breaks out of his rut spectacularly, turning his term as interim mayor in the wake of Mayor Gunderson’s (Bill Murray) death into a ten-term dynasty, living past 100 with a beautiful wife and enough kids, grands and great-grands to make Mitt Romney blush. But in the final analysis, I think of Ronald Ulysses Swanson, paddling his canoe across the lake at Pawnee National Park, serene, satisfied, and just smiling and giggling to no end. [END SPOILERS]

“One Last Ride” is an embarrassment of emotional riches, played almost entirely straight, which is altogether fitting for a show that, as a mission statement, so audaciously defied the logic that comedy must inherently be stupid, impersonal or mean-spirited to work. Pawnee is just a different kind of town. Thanks for the memories, Parks and Recreation, and, it should be said, long live the Streaming Age. I’m sure I’ll be visiting “The Akron of Southwest Indiana” (via Netflix) again soon.