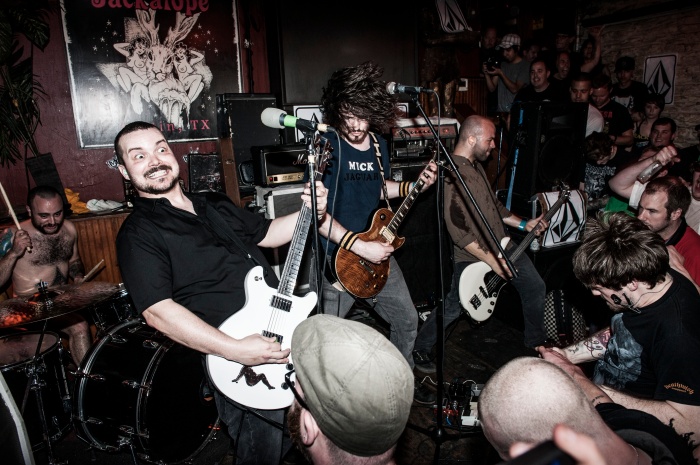 When the first salamander or whatever clawed its way up out of the primordial ooze, millions upon millions of years ago, I wonder, was it humming a little tune, or did that necessarily come later? I am so ignorant of experiencing a waking state without at least the subconscious presence of music that on some level I stubbornly refuse to imagine that life on this planet was ever forced to make do similarly. It both excites and amuses me to think that, while the dull majority was first learning to craft and use rudimentary tools, my ancient apelike ancestors were probably the ones slipping away unseen, grabbing tiger bones and beating them against rocks, entranced by the odd sounds they made, and stirred by the aural possibilities of those sounds made in rapid succession. Some may have been scared of fire, or storms, though I have to think others weren’t too simple or blunt-edged to occasionally contemplate a babbling brook in passing, or a sunset. Energized by the new sounds germinating around them, others might have rushed home to draw the world’s first crude representations of album covers on the cave wall. Eventually, of course, the cave walls became too full of artwork and the cave, therefore, uninhabitable. Thus began human migration, borne not out of existential necessity, as one might think, but instead out of curiosity and creative restlessness. It’s (so absolutely not) science. Oog, the big, loud lug with the stone tools, probably scoffed too.

Even now, I have a predisposition to/borderline obsession with rhythm that I imagine must be, to some degree, genetic. Hence, some bands hold more innate appeal to me than others. Whether its ancestors banged bone on rock back in the Paleolithic Era is something I won’t opine, but a big part of the primal appeal of Florida sludge rock adventurers Torche is the degree and dedication with which it has carried the practice forward to modern times, recalibrating 21st century rock and roll music into primitive art. In Columbus, on a night that felt like my first true taste of spring this year, the artists were both present and in immaculate form. In terms of sound, the band is already formidable on album, but absolutely must be experienced live in order to transmit and receive the full effect of its bludgeoning yet deceptively multifaceted music. Torche’s default posture is to present a towering wall, slow to mid-paced, of expertly distorted, delicately nuanced, outwardly unreasonable guitar and explosive, heavy-handed drums – think, as a baseline, a mashup of Black Sabbath and Nirvana*, except way louder – and then challenge its audience to tune into the multitude of deeper frequencies alive and humming both within and behind that wall. Once audience and band share similar wavelengths, the opportunities for sonic exploration are surprisingly numerous, and substantial. A four-song swath cut from the show’s middle third featured, in rough order, a punishing involuntary headbanger, a spastic, borderline acid-jazz freak out, a repurposed funeral dirge, and an up tempo pure pop gem of the type that folks who don’t listen to the radio (or fully understand reality) would reflexively lament should’ve been a massive hit in favor of the mediocre crap that was instead.

*So, The Melvins then? Um, yeah…yeah, you’re probably on the right track.

Torche’s music embraces as it attacks. It pushes. It sometimes simmers. As mentioned earlier, the music very, very often pummels, with a deftly crafted primeval force that tends to remove traditional head and neck control from the listener’s hands. Torche’s music embraces as it attacks, which is a noteworthy deviation from the norm – and, I think, a credit to the band’s overall talent and level of thoughtful composition – but, first and foremost, it still always attacks. Feeling those ceaseless sonic waves wrack you from the stage can be a real rush. Guitarist Steve Brooks often appears completely removed from the fray, until he decides to turn on a dime into no less than the wizard conjuring the storm in the first place, interjecting winking personal variations on classic, inane frontman banter (including a winning co-opt of Kiss Alive!-era Paul Stanley) and hilarious, isolated stage moves, or unleashing sudden, squealing guitar solos in a fit of neck-strangling ecstasy. Rick Smith is a coal furnace spitting out fearsome, perpetual heat, a John Bonham/Dave Grohl type who grudgingly allows technique to inform his playing despite delivering every drum beat with the demonstrated outward intent to kill. The snares on his snare drum broke halfway through song #2, necessitating an overheated impromptu guitar battle between Brooks and Andrew Elstner whilst he feverishly attempted repair. The occupational hazards of Paleolithic drumming actually started revealing themselves some twenty seconds into the show, when one of Smith’s drumsticks dramatically splintered due to the force of his delivery and was seen momentarily embedded some ten feet up the curtain that flanked the band. By song’s end, the force of the band had already dislodged and shaken it down. By song #3, a previously plainly furious Smith started flashing the occasional smile in amongst his bomb testing. Like so many of the best live bands, Torche tends to bear down and play harder the more it loosens up. It would be exactly that kind of night.

Now that we’re roughly a quarter into 2015, I can report that listening to new music has not yet become the personal priority for me it’s been in previous years. I’ve scoured the landscape in search of new releases but found relatively few to get excited over, though metal’s floodgates (Enslaved, Melechesh, Psycroptic) are seemingly at least beginning to strain. One of the few bright spots among the gloom thus far has been Torche’s new album, the monolithic and aggressive (to a fault) Restarter. I’ve only owned it a couple weeks, making me feel embarrassingly underprepared for the show, which was itself something of a last-minute proposition. I’ve received a healthy serving of perspective in the last 24 hours, however, and, in retrospect, deciding/conceding to miss this concert – my first seeing Torche headline after two stints as overqualified support – would’ve been lunacy. Even with my studies admittedly lagging, even confronted with a setlist where almost every song was a standout, I recognized the tasty and tricky riffage of “Reverse Inverted” (off the band’s 2012 breakthrough Harmonicraft), grooved to the sinister strains of “Minions” and the rollicking “Loose Men” (both off Restarter), and felt physically swept up in the swirl of Harmonicraft’s buoyant, propulsive, and exquisite “Kicking”. For every song I overtly recognized, I internalized two more, getting increasingly caught up in the relentless sledgehammer riffs and rhythm, smiling, coasting, and knowing instinctively down which twisting path each led. The hour+ set was perfectly paced, with the band routinely careening out of one song and into the next, barely giving the appreciative crowd sufficient time to breathe, let alone cheer. Torche live is always poised for the next giddy attack.

There were songs I didn’t recognize so well, or at all. I chalked those misconnections up to personal failings – too little time spent exploring Restarter, or getting reacquainted with Harmonicraft, or the fact that (at that moment, since corrected) I didn’t even own the band’s much-lauded second album Meanderthal – but I felt myself enveloped and invigorated by the music nonetheless. Brooks’ reedy wail, forever poised on the verge of being snuffed out by the surrounding din, often sounded like a man in the process of drowning, but his periodic vocal harmonies with guitarist Elstner soared each new time they were unveiled. Brooks can also do highly creative things with multiple feedback layers, at one point strategically resting his still singing guitar by the amplifier and strapping on another in order to play out the perfect ending, the sounds of the two instruments contorting into something increasingly indistinct before finally folding into one another, like perfectly mixed paint. I’m no guitar tech enthusiast, but I still couldn’t help but notice with interest how many people around me would lean in and huddle close to the stage to inspect the goings on whenever Brooks crouched down to fiddle with his effects rig mid-song. Torche onstage is a band of clear intent and possessed of surgical precision, especially for a troupe that presents as something so outwardly brash and elemental. To me, there’s an inherent and very good reason it has displayed equal facility opening shows for, though hardly being overshadowed by, a hardcore colossus like Converge, or a stoner-thrash juggernaut like High on Fire. Torche adapts by attacking; it overcomes by overwhelming. Those shows were my initial introduction. What a pleasure to see the band blow the roof off of its own stage for once. I invited every friend within earshot to this show, and, in the end, had the privilege of introducing two of them to Torche as once I had: sans prior experience or any real expectations…making a better chance to potentially be taken in, or, on just the right night, amazed. One of them left a budding new fan, the other a true believer, and I left a happy man on all accounts.