“Does anyone live here?”

“Not since ‘63, when it happened. Every kid in Haddonfield thinks this place is haunted.”

“They may be right.”

The first glimpse of daylight, a commodity that will prove both precious and fleeting, comes at the 11-minute mark of Halloween, as director John Carpenter finally sets his scene in the sleepy town of Haddonfield, Illinois. Leaves rustle and blow down the tree-lined, kid-dotted sidewalks of suburbia. The sky is seriously overcast, but still can’t help feeling like an improvement, or an oasis. This comforting and innocuous first look comes on the heels of three consecutive sequences – an ominous, slow developing close-up, a shocking murder, and a nerve-rattling escape – justly famous in the annals of horror history, and though the differences that separate Halloween from the many progeny it would either directly spawn or spiritually inspire are both myriad and blinding, even in pitch darkness, its images linger longest and make the most impact, so it is there that almost any straight analysis should begin. END_OF_DOCUMENT_TOKEN_TO_BE_REPLACED 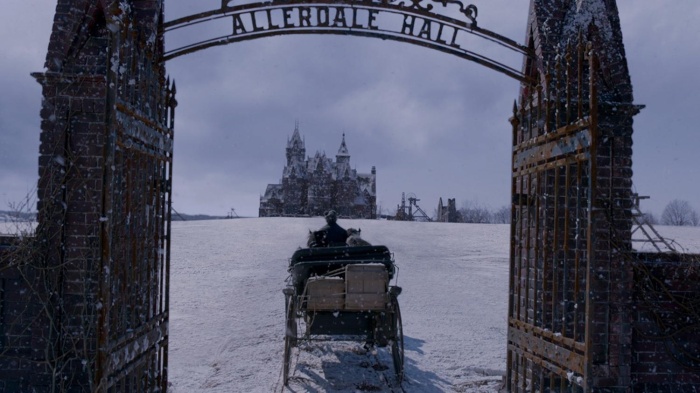 “You would know. Our little Jane Austen…she died a spinster, didn’t she?”

“I’d prefer to be Mary Shelley, actually. She died a widow.”

Somebody up there likes Guillermo del Toro, and, really, what’s there not to like? The genial Mexican writer-director, to whose name the appellation “visionary” has been a fixture of press releases for the last decade*, is a furious developer of fantastic (both in subject matter and in practice) ideas, a walking film encyclopedia whose eyes light up when he talks about movies – his or anyone else’s – and what feels like one of the few remaining true auteurs in Hollywood, or at the very least the only one working on quite so grand a scale. If he has never achieved commercial success commensurate with his level of artistry, A) that would be asking a lot, and B) he has nevertheless been afforded generally free reign to bring his daydreams and dark fantasies to life, which, in today’s Hollywood, is already something of a miracle. END_OF_DOCUMENT_TOKEN_TO_BE_REPLACED

For a taste of the degree to which boxing was both predominant within and invaluable to the twentieth century sporting landscape, one needs look no further than its numerous, enduring idiomatic contributions to the greater sports lexicon. Most are so subtle and ingrained that we don’t even realize the origin as we say them. “On the ropes,” “down for the count,” “below the belt,” “roll with the punches,” “cornered,” “laying the leather,” “going the distance,” “delivering the knockout blow,” “sucker punch,” “ringside seat,” “throw in the towel,” and so on, to infinity and beyond. It will take generations yet of studied, institutional indifference to effectively work boxing metaphor and terminology completely out of the play-by-play calls of all your other favorite sporting events, particularly on Saturdays and Sundays, and even then only if boxing cooperates by finally succumbing to the all-encompassing “death” that so many observers, whether casual or, more often, anything but, have prescribed and pronounced for it over the past 25 years or so. END_OF_DOCUMENT_TOKEN_TO_BE_REPLACED

“This is the Emergency Broadcast System, announcing the commencement of the annual purge. At the siren, all emergency services will be suspended for twelve hours. Your government thanks you for your participation.”

The frustrated novelist in me hasn’t stirred for several years, though once upon a time his grand designs, non-stop pseudo-profundities, and fussy protestations were the entirety of my creative life. He had big plans indeed. Once, over the better part of a two-year period fresh out of college, I spent large chunks of my free time furiously writing, and even more fervently outlining/game-planning, my own great American novel, a conceptually sprawling yet intimate, (I thought) painfully claustrophobic, tale of desperate survival in a dystopian future. The more I worked on actually writing the most vivid individual moments, the more thought I found myself giving over to backstory and larger concepts, mentally adding characters and scenes and set pieces by first the hand and then the bucketful, until what had started years earlier as a short story in my college Creative Writing class had been officially earmarked as not just a novel but a trilogy. END_OF_DOCUMENT_TOKEN_TO_BE_REPLACED

So what do roadies actually do, pre-set, at a Chvrches concert? I mean, can you physically tune a keyboard or a drum machine? Is there really anything one can do to prime a sampler for its big moment on stage, besides, I suppose, making sure it’s plugged in? I understand the legitimate need to test the three microphones, one for each band member, but that single loose end was inexplicably left dangling. Otherwise, it’s just a procession of reed-thin dudes wandering around, pausing occasionally mid-amble to disinterestedly look at something obscure in one equipment bank or other, or on the floor, or at the back of the pavilion, before resuming their strolls. In fact, what I initially mistook for a trio of stagehands, I soon became convinced was actually just the same guy, crossing the stage again and again in rapid, desperate, succession, apparently competing against himself to stand out from a crowd of one. Was he just there for show, I wondered, to convince the audience that, somehow, important preparatory stuff was going on up there and we weren’t simply playing a waiting game? END_OF_DOCUMENT_TOKEN_TO_BE_REPLACED