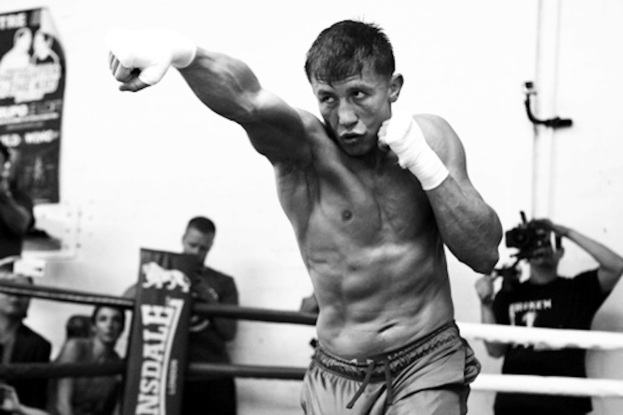 For a taste of the degree to which boxing was both predominant within and invaluable to the twentieth century sporting landscape, one needs look no further than its numerous, enduring idiomatic contributions to the greater sports lexicon. Most are so subtle and ingrained that we don’t even realize the origin as we say them. “On the ropes,” “down for the count,” “below the belt,” “roll with the punches,” “cornered,” “laying the leather,” “going the distance,” “delivering the knockout blow,” “sucker punch,” “ringside seat,” “throw in the towel,” and so on, to infinity and beyond. It will take generations yet of studied, institutional indifference to effectively work boxing metaphor and terminology completely out of the play-by-play calls of all your other favorite sporting events, particularly on Saturdays and Sundays, and even then only if boxing cooperates by finally succumbing to the all-encompassing “death” that so many observers, whether casual or, more often, anything but, have prescribed and pronounced for it over the past 25 years or so. Personally, I don’t see the day coming soon, especially considered through the prism of an event like Gennady Golovkin’s fight versus David Lemieux. Speaking of idioms, as we were, the “puncher’s chance” is an interesting one, in that, like the others mentioned above, it evokes a very specific scene, that of the overmatched pugilist suddenly turning the tables on the strength of one punch, or lethal combination, summoned apparently out of thin air, and dramatically vanquishing his foe. Boxing history is replete with examples of the “puncher’s chance” not only evening but upending the odds, and has deployed it as a literary/promotional device time and again, in effect saying that, no matter what you’ve seen in the ring, or think you know, nothing can ever be set in stone before the stone in one’s fists has been allowed to say its peace.

“He let his fists do the talking…” Hey, found another one.

The dramatic potency of “the puncher’s chance” may not necessarily be the reason matches like Golovkin-Lemieux exist, but it was the reason it might be reasonably presented as a legitimate pay-per-view attraction. The winds have been blowing in this direction for some time now. Golovkin, the steely, outwardly unassuming Kazakh destroyer, has been on a rocket ride straight to the top of the sport of late, cultivating an already fairly breathtaking win-loss record, consisting of 33 of the former to none of the latter, with thirty wins coming by way of knockout – including, as ring announcer Michael Buffer solemnly reminded the sold out Madison Square Garden crowd, twenty in a row. At a time when, thanks to fiercely (sometimes cheaply) competing promoters, semi-regular but no less off-putting instances of product dilution, and a reliance on isolated, antagonistic, wagon-circling broadcast venues (essentially HBO’s high perch vs. the PBC on its 8000 platforms), belts seem to mean less than they ever have, Golovkin has been collecting and unifying Middleweight alphabet titles like he’s angling for some completion prize – a hacky free t-shirt, perhaps (check out that hot pink number supplied by the WBC!), or maybe a personalized belt to keep as a memento. More importantly, he’s been building up an impressive amount of buzz by ruthlessly going about the one business virtually guaranteed to do just that – separating his opponent from his senses or else pounding him into the ground – and doing so methodically, dependably, and brutally. For a guy who, in his unguarded moments outside the ring, looks, with his big ears, kind eyes, and perpetual, goofy smile, a little like Alfred E. Neuman’s younger brother, Golovkin’s punching power is, frankly, terrifying, and is quick becoming the stuff of legend. As one of the centerpieces of HBO’s canny, post-Pacquiao strategy, Golovkin’s star has been on an uninterrupted rise for the better part of three years now, until, finally, the demand to see him fight has grown proportionally to the point where his brain trust had to begin considering pay-per-view.

The problem with that plan came from the makeup of the modern Middleweight division (160 lbs.) – historically boxing’s second most glamorous after Heavyweight – which presented an assortment of talented, sturdy, generally underwhelming, imminently overwhelmable pugs and greater* for Golovkin to ravage, predictably albeit entertainingly, like a hot chainsaw through butter. The bigger game for “GGG” all appeared to be either Junior Middleweight royalty** coming up to fight him, or Super Middle names like Andre Ward coming down in weight for the opportunity to get starched by the next big thing. And therein lies the trouble with top boxers: for folks who valiantly absorb so many blows to the head, you’d rightly worry they might be less concerned about how much they are paid to do so (thankfully, no). Regardless of his unflagging momentum or grassroots appeal, a spider like Golovkin has to make tremendous financial sense in order to finally draw the Canelos, Cottos, or Wards of the world into his web, and his pay-per-view performance, both in terms of sheer numbers and as a line on his resume, is a crucial component of that formula. Moreover, the Middleweight division didn’t suddenly get great overnight just because Golovkin required a higher-profile dance partner. Enter Montreal’s David Lemieux, a gun-slinging former wunderkind with lead fists and the looks of an underwear model, successfully rehabbing his career with seven convincing KO victories on the heels of devastating, clear blue sky losses to the likes of journeymen like Joachim Alcine and Marco Antonio Rubio. So what if Golovkin himself once decimated Rubio in a mere two rounds? Lemieux was young, hungry, and again on the upswing, a proven, if uneven, commodity in the ring, and, as a serious puncher in his own right, a potential puzzle that Golovkin had never before faced. He had a “puncher’s chance”, went the conventional wisdom, and then some.

Conventional wisdom has a way of wilting in the spotlight. Couple that with the amount of pressure exerted in a typical Gennady Golovkin fight, and the equation becomes not only unfair but nearly impossible. For all his vaunted “puncher’s chance”, Lemieux made little imprint on the fight. Golovkin, by comparison, marched forward steadily, cutting off the ring expertly and hammering Lemieux with his bludgeoning left jab. To me, the jab’s efficacy recalled that of Kelly Pavlik, the semi-tragic working class hero who dominated at Middleweight for a couple-year period in the early 2000s largely on the strength of his height and a piston jab that, by almost any measure, hit as hard as a traditional power punch, but was thrown twice or three times as often. Golovkin’s jab is truly a fearsome weapon. Not only does it hold his opponent at bay and set up combinations, as conventional jabs are intended to do, it inflicts significant, oft debilitating, damage in the process. That’s how heavy his hands are. When the right hook comes, as it did all night against Lemieux, the opponent is already so softened up that its impact can be exponential as well. Lemieux displayed the ample heart that has been a predominant feature of his comeback – something he, perhaps, conspicuously lacked when he was being touted as a “can’t miss” prospect – and landed stray hooks here and there, but Golovkin was never rattled, or even particularly perturbed.

In the fifth round, Golovkin, whose jab removes the need to constantly headhunt, connected on one of his patented liver shots – the sort that dramatically put Martin Murray down for the count. Lemieux was forced to take a knee, then, for excessive measure, got rocked from his kneeling position by an instinctual follow through hook from his opponent. “If I had done that in a fight, I’d have been disqualified,” quipped HBO analyst Roy Jones genially. Lemieux rose, in apparent distress, and lasted the rest of the round, even absorbing an equally half-second late hook after the bell rang. Golovkin, who doesn’t have to hit people late in order to ring their bells, got the benefit of the doubt in both cases that he wasn’t fighting dirty, which I think was the correct call. The fight stretched further and Lemieux slowly faded from “puncher’s chance” to “punching bag” (hey, another one!), and was even halted momentarily in the seventh so the doctor could give him a look. The accumulation of punishment became too much for referee Steve Willis, who, after at least three minutes on high alert, finally stopped the fight in the early eighth round. Throughout the performance, against an opponent HBO analyst Max Kellerman characterized as objectively his most worthy so far, Golovkin impressively wielded not just his considerable offensive firepower, but demonstrated great ring command, stifled Lemieux’s punches defensively, and proved his bona fides as a true student of the game. When HBO unofficial scorer Harold Lederman emerged early to complain that Lemieux didn’t appear to have a plan for Golovkin’s onslaught, I thought immediately of the words of another surprising student of the game dressed up as a bogeyman, Mike Tyson, who said, “Everybody’s got a plan until he gets hit.” The HBO announce team practically said the quote in unison moments later.

The name Mike Tyson exerts a mystical, almost totemic, hold on boxing fans, similar in some ways to how basketball fans still revere Michael Jordan. The boxing intelligentsia is forever invested in discovering and identifying “The New Tyson”, someone who might capture the national imagination and, by virtue of his unparalleled in-ring ferocity, break faces and pay-per-view records in equal measure, thus lifting the sport out of its imagined doldrums. In his prime, Tyson was a nigh unstoppable force of nature, until hubris and laziness conspired with Buster Douglas’ single performance for the ages to stop him cold one odd morning in Tokyo. For all Tyson lost that day, and would continue to hemorrhage in the years to come, his aura remained more or less intact, irrevocably tied to that vision of the onrushing destroyer that captivated fans the world over. As was perhaps inevitable, given his cold, businesslike demeanor and explosive, undeniably impressive results, Golovkin has begun being mentioned as a modern-day Tyson of sorts. Whether this kind of identity can gain traction will largely depend on the fans, because Golovkin and Tyson, despite their similar results, are not terribly similar fighters.

Tyson was a savage attacker who threatened to take his opponent’s head off at any minute. Golovkin is a steady pressure fighter who brutalizes his opponent with pulverizing punches in waves, until he can either take no more or his corner decides to save him from his own bravery. Golovkin’s aura of in-ring invincibility isn’t yet as tested or tangible, but, thanks to the times we live in, and, no doubt, to the man himself, who still handles himself with humility, even if he was ever to approximate Tyson’s heights, he still wouldn’t have as far to fall. Golovkin’s ascendancy comes at a particularly opportune time, and a transitional moment for the sport as whole. With the notable exception of Canelo Alvarez, no one is more prepared than he to step into the gulf left by the (theoretical) departure of now-retired former pound for pound kingpin Floyd Mayweather and his longtime foil/nemesis, Manny Pacquiao. For now, Golovkin is focused on cleaning out an already fairly hermetic Middleweight landscape, collecting its titles, and coaxing the biggest names from neighboring divisions to come and play for cash, big prizes, and, potentially, bigger knockouts. He is invested in his devastating craft, or what he endearingly calls in his fractured English, his “big drama show”. Mega-stardom, if and when it comes, will do so organically, as it did more or less for Tyson, but Gennady Golovkin is already one of the biggest stars in the boxing realm. The proof is in the results.