“He mobilized the English language and sent it into battle.”

Joe Wright’s Darkest Hour is history writ large right down to the colossal block font used in its main titles, blown up and simplified enough to be digestible without ever quite spoon feeding its audience. It depicts with near-relentless and, occasionally, nerve-wracking intensity Sir Winston Churchill’s harrowing first three weeks as British Prime Minister, a particularly fraught period mere months into World War II where the European continent balanced on a knife edge and the proud United Kingdom stood by, dumbfounded, not to mention relatively powerless for the first time in centuries, watching one neighbor state domino after another (Belgium, Denmark, then, unbelievably, France) fall under the crush of Nazi Germany’s advance. Taking place in a rushed procession of drawing rooms, parliamentary meeting halls, and the vast military bunker located below 10 Downing Street, Wright’s film is a symphony of faces caught mid-reaction, running a gauntlet from polite to righteous indignation, fancy and frustration, amusement, bemusement, futile outbursts and beyond, all focused on the imperious Churchill, who reserves, or, more properly, hoards, the most colorful volcanic outbursts all for himself. Rarely in cinema history has a character, historic or otherwise, been so the unquestioned gravitational center of an entire movie without his or her name appearing above the title, but anyone with a passing knowledge of the man – who would assume mythic stature in the process of teaching the world about courage and fortitude in the face of unblinking evil – should have expected no less. 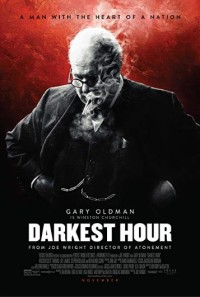 A gruff, impatient, often overwhelming engine of dogged forward motion, Churchill was a theatrical creature anyway – one moment the eccentric raconteur quick with a crowd-pleasing quip or cutting verbal jab, another the grim, taciturn, professional war chief hardened by uneven decades in the field who did not shrink from the consequences of his bold and often desperate executive decisions but was surely shaken by them. I’ve been fascinated with Churchill – and, by extension, World War II history – for years, and have looked forward to examining him in this context since the moment the project and its star were announced. You could, of course, peel for days without ever reaching the heart of the Churchill onion, and it was already in his nature to hold even family and close confidants at arm’s length. Darkest Hour nonetheless endeavors to deliver as close to a 360-degree portrait as possible* under artificial circumstances, and it is a tribute to the depth, daring, and commitment of Gary Oldman’s fearsome performance as Churchill that I can report it does capably scratch his surface, perhaps even digging just below. First and foremost, embodying the imposing, ungainly statesman makes for an intensely physical role. You can intuit that most everything that made it to screen – the prime minister’s alternately halting and booming speaking voice, his simultaneously purposeful and shambling gait, even his way of intently studying bystanders and opponents as they spoke – was fussed over and second-guessed by Oldman, clearly intent on creating the performance of his splendid career.

*The early outbursts of idle chatter about Churchill’s long-suspected alcoholism feel arbitrary and tacked on to the narrative here, as if writer Anthony McCarten were less interested in painting a portrait than putting together an encyclopedia entry.

At first, disbelief remains a stubborn companion. Oldman emotes with thrumming ferocity from beneath layers of facial and body prosthetics – it goes without saying that the Oscar-nominated makeup work is outstanding – contorting his normal pastoral English speaking voice (not that I’m now convinced I’ve ever heard it) into a roller coaster of mumbles, grumbles, explosions, and impenetrable inflections. It can be distracting to say the least, all this pageantry, paired with the gnawing fact that we know intellectually we’re looking at the great Gary Oldman, even if we nevertheless cannot quite see him. By and by, the inside and outside congeal into a living thing. There is an intriguing early scene where Churchill’s wife and children gather to toast his new appointment, though it has more the feel of paying homage to some sort of weird idol than of sincerely celebrating the success of a loved one. The man’s discomfort is plainly etched on his face even as he attempts humble pleasantries, whereas his family, despite the merry facade, seems fundamentally clueless as to how to relate to him. Holding together the proceedings by their fraying edges is Churchill’s long-suffering wife, Clemmie, played magnificently by Kristin Scott Thomas as an old woman who still acutely feels her spousal duty in direct parallel with that to her country. She loves Winston in spite of his rampaging imperfections, but also talks matter-of-factly of the sacrifices they’ve all made in perpetual service to his career and of the “reward” that awaits them with his ascendance.

If Scott Thomas is immediately marvelous, Oldman slowly but surely grows to be that and more as his Churchill endures the crucible of an increasingly impossible charge. To this end, Wright lends him a timid but tenacious personal secretary (Lily James, working the same “plucky ingenue” angle she did as Rose in the latter days of Downton Abbey) through whom the audience might better relate to him. Indeed, Ms. Layton and the audience share the same introduction, which sends her fleeing in horror at naught but Churchill’s unvarnished, irascible self. It’s no coincidence that, as the old coot grows to acknowledge her worth as a person, and, eventually, a tacit advisor – his war council is populated otherwise by sycophants and plotting (pacifist) snakes – Oldman’s portrayal also rounds into shape and he finally completes his tricky disappearing act. Seen through the prism of history now well known but then yet to be written, it is nevertheless amazing to reflect that any among the British government, let alone a significant splinter faction including the deposed PM, counseled negotiation with genocidal madman (and notorious backstabber) Adolf Hitler as a last ditch method of preserving the empire. Yet that is the world into which Darkest Hour deposits us. Churchill, who, to his credit, identified and quantified the Nazi menace before almost any of his peers on the world stage, would instinctively fight and die** rather than consider capitulation, but is rocked by the difficulty, weighed against an unfathomable and steadily rising human toll, of converting his words into meaningful, galvanizing action.

**Any veterans of my XXXL vault piece “Iron Maiden Saved My Life” (either version) might recall that the seed of my interest in Churchill was first planted by the defiant speech to Parliament in which he proclaimed, among other things, that England would “go on to the end…fight on the seas and oceans, fight with growing confidence and growing strength in the air…defend our island, whatever the cost may be”. That speech, which, slightly altered, serves as the stirring oratory climax of “Darkest Hour” was used in concert for years by the British metal heavyweights to introduce their doomed first person WWII flyboy saga “Aces High”. In short order, I became probably the only twelve-year-old in the state of Tennessee with any sort of working knowledge of Winston Churchill (Maiden also later gave me a leg up on interpreting Coleridge’s “Rime of the Ancient Mariner” in college). Rapt, I mouthed the words as they issued from Oldman’s lips to address eerily silent rooms on both sides of the screen, and just couldn’t help but smile to myself at the end. Sometimes, history can come alive.

Darkest Hour cannot be said to have a plot so much as an overarching strategy – not unlike an uncommonly wise and ornate reality show – which is to present the indomitable Winston Churchill with an escalating series of no-win military propositions at tremendous cost in terms of both human life and personal reputation and watch him attempt to bluster and bull rush his way through to daylight anyway. In a fairly shrewd move that pays dramatic dividends, Wright keeps the encroaching Nazi plague firmly in the background for the most part, much as the Red Death infected the countryside just outside the walls of the abbey where Prospero and his nobles reveled in the famous Poe short story. Though few enough people die onscreen, what we see instead as the prospect of a ravaging German invasion inches closer to shore is arguably more impactful: Ms. Layton driven to tears by memories of her brother, lost in battle the prior year, or the news of infantrymen surrounded and slain at the remote coastal outposts of Calais and Dunkirk; King George VI (a sneaky good Ben Mendelsohn) wracked with guilt over the choice he must inevitably make between ruling in Canadian exile or certain death among his people; Churchill scrutinizing European theater maps the size of a bedroom wall as if trying to will a miracle out of thin air, and pacing in overheated despair until, exhausted and crestfallen, he can finally do nothing but sit and stare into the near distance.

If I survived Darkest Hour’s early going with my disbelief intact, I was presented similar nagging tonal problems as it ended. From the streets to the palaces to the dingy halls and claustrophobic backrooms of power, Wright’s wartime London just feels right, every bit the equal of Scott Thomas’ fierce elevation of a tiny but illuminating role and Oldman’s full-throated and bodied immersion into a titanic one. Light and charming as Lily James remains, however, Ms. Layton the character feels so much like a cinematic invention that I was legitimately surprised to learn she was a real person. Along the same lines, Churchill engages in a bit of incongruous eleventh-hour creative thinking and extreme public outreach that ultimately, spontaneously, leads to a critical policy breakthrough. Meant to be inspirational, I found the sequence manipulative instead, not to mention almost insultingly tidy. I don’t doubt the British citizenry shared en masse their prime minister’s steely resolve even as Luftwaffe planes began stalking them from the skies above, though I wonder that any group of 1940s commoners might convene, presumably unrehearsed, into such a passionate, persuasive, soundbite-slinging flash mob. Minor distractions chip away at the pressurized spell cast during Darkest Hour’s middle third, though every time they inch the enterprise toward mediocrity, the abiding power of the central performances propels it forward again. I was amazed and greatly moved seeing the resolute and defiant Churchill suddenly racked with uncertainty – painfully, almost purposely alone, as if undergoing penance – at points almost frozen with fear, though his mind’s machinery grinds ever onward. Oldman clearly was too, and lays the great man open for our inspection – twitching eyes and quivering lips, labored breathing, the lines in his face seemingly deepening as untold decades of personal reckoning come due for all, by his impossible decision, in a cataclysmic instant.

Oldman might not even have realized he had this in him. If so, he’s not alone.