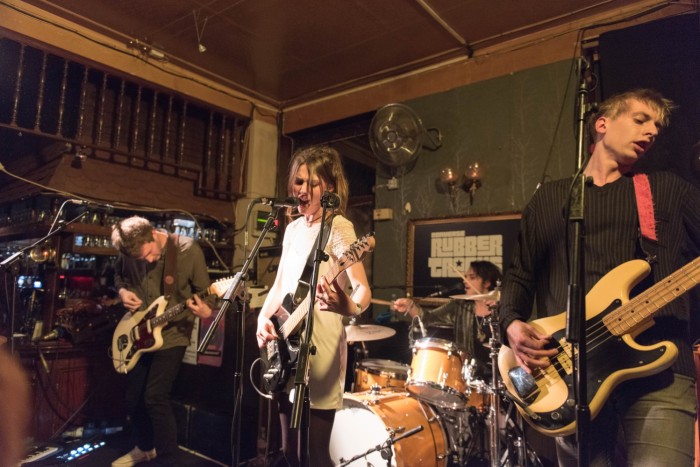 I always knew the line-blurring London indie rock quartet Wolf Alice, who I’ve seen billed more than once in the trades as a beguiling sort of cross between folk and grunge, was the real deal, but I also often found the band too reverential (or, if you like, referential) to the past to be able to endorse its present wholeheartedly, or at least without including that minor complaint as a caveat. My recent cross-genre year-end top twenty albums post, which tagged Alice’s insinuating full-length debut My Love is Cool as the #4 “non-metal” album of 2015, and its #10 longplayer overall, nevertheless damned it with more than a touch of faint praise, mostly for the frequency and dexterity with which the band overtly reminded me of someone else. Time passes, however, whether spent in light reflection or serious rumination, and so often renders such high-minded certainty an elastic, equivocal thing, and its wielder a fool. END_OF_DOCUMENT_TOKEN_TO_BE_REPLACED

I have always had a procrastination problem. To hear my mother tell, it’s more like a birthright. My parents are both procrastinators and so I was hit with both barrels. I “never had a chance,” she’s told me more than once. At the conclusion of what I thought was a fairly banner second year, I closed up shop for DAE on December 18, 2015, leaving myself time off for all my various holiday travels and, in theory at least, building in enough room to comfortably finish my traditional year-end album countdown within the roughly three-week window. Or so I thought. Unlike last year, this vacation time did not especially cry out to be shared, plus I received a slew of unexpected bumps and priority adjustments that I did not experience in 2014. I still occasionally get annoyed that essentially taking the month of August 2014 off in order to write my “Iron Maiden Saved My Life” essay precluded me from reviewing Guardians of the Galaxy or paying my proper, bottomless respects to the late Robin Williams. Unless I have something at least under construction at all times, I can’t maintain the schedule I want for this blog, which is, roughly, to produce one reasonably thorough/polished piece per week. END_OF_DOCUMENT_TOKEN_TO_BE_REPLACED