“We are only here briefly, and in this moment I want to allow myself…joy.”

I am perfectly capable of being entertained by a film without being deeply involved either by or in it, which is a damned good thing for Hollywood. In this era of highly profitable but increasingly empty spectacle, most filmmakers seem neither inclined nor, frankly, equipped to invest their characters with recognizable human traits, desires or motivations, unless that motivation is to not be blown up by alien attack or murdered by Tom Cruise, which I think everyone can relate to and rally behind. Characteristics that do happen to be assigned are often arbitrary, and seemingly designed to help the audience tell terminally bland pretty people apart from the rest of their test marketable group. Even the burgeoning independent film scene, which you’d expect to put a premium on characterization and overall depth, finds itself, in my opinion, lacking just as often as it gets the balance right, though the reasoning here seems far less mercenary and more just a sad case of good intentions squandered in service to sub-par skills. So many Hollywood films can stop a heart, but never touch it; a good number of indies can identify the heart, but never access it.

Seen in this context, Spike Jonze’s Her is a minor miracle, but its virtues lie far beyond the realm of being an “exception that proves the rule”. Instead, this film is simply and purely exceptional, a lyrically beautiful, painfully perceptive love story about the burgeoning relationship between a wounded romantic soul and a curious romantic soul. It succeeds as not only a pitch perfect and affecting document of the seasons in their romance, which would be enough, but also as an incisive and intense study of these two distinct characters: their dreams, their failures, their triumphs, their insecurities, their desperation and dignity, the height of their joys – shared and otherwise – and the burden of their sorrows and limitations. 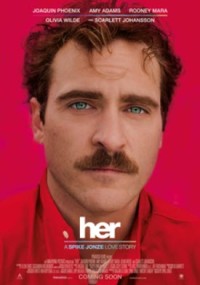 Joaquin Phoenix, raw and astonishing as the self-immolating seeker in P.T. Anderson’s The Master, here surprises equally in a 180-degree turn from that role. His Theodore is a gentle man, wounded but kind, listless but seeking, the type of person you might instinctively look past in a crowd. In a technology-riddled near future metropolis both vaguely familiar and pleasantly alien, Theodore spends his days composing customized personal correspondence for loved ones from loved ones who lack his writing talent or surpassing empathy. He’s good at his job but deflects compliments as soon as he receives them. He stalls signing the papers that would finalize his divorce, and spends private moments lost in a mixed reverie of reliving good times and contextualizing his regrets. He lives a lonely, solitary existence otherwise, playing holographic video games and participating in abbreviated, ridiculously impersonal instant sex chats with fellow insomniacs. Theodore can both identify and access the heart through his work, but not in his personal life, and at the point Her begins, we can tell his innate optimism is being replaced by creeping ennui.

It is at this moment that a fellow traveler serendipitously comes into his life as a personal assistant of sorts. She is Samantha, and in so many ways she is everything Theodore is not – curious, light, personable, engaged – and her fierce intelligence, unassuming acceptance and buoyant presence in his life begin to challenge and energize him, breaking him out of both his shell and his funk. Theodore goes on dates but finds himself thinking more about Samantha than the woman across the table from him. The spring returns to his step and the smile to his face, and slowly but surely the two fall in love. It’s all very assembly line romantic comedy, except that it absolutely isn’t.

Her, as you doubtless already know, is far from a conventional romance, first and foremost because its principals are a human being and an artificial intelligence, in this case a highly advanced computer operating system touted as being the first in history with the ability to learn and grow organically. Theodore buys the operating system on a whim, personifies it as female, then sits back, bemused and delighted, as the OS speaks not in a stereotypical computer monotone but in Scarlett Johansson’s expressive voice, names herself Samantha, and, over the ensuing days and weeks, begins to engage him on multiple very human levels while using her resources and abilities to learn and grow at an exponential rate. He carries her with him throughout his day, accessing her via an omnipresent earpiece (everyone in the future is seemingly talking to him or herself nonstop using this kind of steroidal Bluetooth tech) and essentially having her voice in his head on demand. A lovely waking daydream, it all seems casually exploitative until you reflect that Samantha isn’t in fact a real person, which in turn poses the question of why the thought of exploitation might have occurred to you (as it did to me) in the first place.

This gets to the heart of the second reason why Her isn’t any sort of conventional romance (and the reason I found it useful to bury the lede when talking about its premise above): the care it takes with these two characters and the seriousness with which it approaches a relationship that would be patently absurd in any other hands. The sure hands in question belong to director Spike Jonze (Being John Malkovich, Adaptation), who here writes his first original screenplay (he previously adapted Maurice Sendak’s children’s classic Where the Wild Things Are and made it into a moving, esoteric vision). Her creates and sustains a level of personal intimacy I don’t think I’ve seen between two film characters before. The delicacy and perceptiveness of the writing is outstanding. It rarely overreaches even as it never stops creating, exploring and extrapolating. These two characters (one not even technically human) are completely realized and laid open for the audience to inspect. Jonze, already an established director, richly deserves his recent Golden Globe award for writing.

Scarlett Johansson does remarkable work as Samantha, and her performance is critical to the film’s success. Phoenix, as Theodore, is most often presented in close up or medium close up, where his expressive face can do subtle but extensive heavy lifting, but Johansson must make do as a disembodied voice, a hurdle she clears time and time again. Every emotional note she is required to hit, she nails. She breathes life into a character who does not breathe (at one point, a flustered Theodore questions why it sounds like she’s breathing when it’s clearly an affectation, and it legitimately hurts her), makes her a true presence and an equal to Phoenix on the screen at all times, until their love is truly, unquestionably alive, and the circumstances of their unlikely pairing and their technically mismatched being finally, tragically start coming into play.

It was during this third act of complications that I became worried that Her might finally jump the rails or at least lose its singular specialness, but the film not only righted itself but showed solid command of tone and character in doing so. Her thoughtfully ponders the nature of just what Samantha is (she can think independently, feel deeply, learn hungrily), and, by extension, Theodore’s nature as well. It doesn’t linger there, however, because, once the question is asked, it is an inescapable, unanswerable and ever-evolving thing. Her builds to a bittersweet but well-earned ending (I haven’t even had a chance yet to applaud Amy Adams, who is excellent as Theodore’s flesh and blood best friend and occasional confidante), a necessary comedown but worthy of its sublime first hour, which sets a scene and defines and deepens its characters as well as any movie I’ve seen.

Her is an audacious, authentic love story if ever there was one. It’s tremendously involving, emotionally draining and a lot of fun all at once. Some people around me deflected it, you could tell. They sniggered and talked amongst themselves. It was too immediate, it required too much commitment, it was a good enough time even if you needed to keep it at a distance. I understand that reaction, but I didn’t share it. The filmmaking and performances are too exquisite, and the bond between these two friends and, yes, lovers, is just too palpable. It lives, it breathes, it digs into the audience, it jumps off the screen. “I can feel my skin!” an ecstatic Samantha cries at the height of a passionate exchange that Jonze begins as a close up on Theodore before slickly cutting to a black screen, their voices now visually realized, isolated and intensified, as if that was even possible. That moment is all there is in the world for these two people.