Not only am I still unsure exactly what I think of Harmony Korine’s Spring Breakers, following what will likely be my first and only viewing, I have my doubts as to what the filmmakers intended for their audience to feel afterward, if anything, or even what they themselves thought while conceiving and making it. I could go with my instinct here, declare it a fairly awful movie with no further comment necessary, and be done with it, but what gives me pause is not the question of whether this is an authentically bad movie, but why. It’s a pretty enough-looking film about the intersection between hedonism and nihilism, between youthful rebellion and destructive abandon, in which cute girls in bikinis commit robbery, stare blankly at the ocean, play loose with boys and guns and fifths of liquor and behave in general with a distinct, I would say deliberate, lack of morality. They run afoul of the law, then of a legitimate criminal but small-time human, who seduces them nonetheless with all his ill-gotten riches and sleazy attention. Things escalate and they become his ad hoc harem. The end. When FOX News runs those breathless yearly, “Beware of Spring Break” segments, this is quite possibly the kind of behavior they’re warning against, or at least what they might fantasize as its logical endpoint. This film, however, is such a worst case scenario that it starts with zero credibility and then runs dangerously in the red for 90 additional minutes. 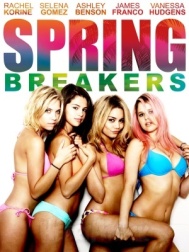 Spring Breakers, which plucks its fresh-faced but restless college girls* from a grain-fed, God-fearing, undisclosed ultra-Americana location and deposits them into the steamy belly of capital-D Debauchery in Spring Break-crazed St. Petersburg, Florida, is a bald-faced provocation from beginning to end, with pretensions to greater meaning but a dire lack of thoughtfulness. Those moments where it strains at something deeper fell so flat in context that they angered rather than disturbed me. There’s also a creepy and pronounced voyeuristic quality running throughout. At what point does a filmmaker’s relentless laser focus on anonymous, writhing young bodies stop being theoretically titillating and start becoming actively depressing? Almost immediately, it turns out. Korine has no compunctions about drowning his revelers and audience alike in a sea of alcohol, piggish behavior, copious female nudity and weird violence for the sake of shock value alone, but lacks the courage to follow through on the consequences of his characters’ many stupid and/or arrogant actions, or allow us as viewers entry into relating to his titular quartet in any meaningful way at all. The characters as presented have all the depth and resonance of a graffiti tag spray-painted onto a southbound train. I first checked my watch at the ten minute mark.

* Several of them, notably star Selena Gomez, are famous in real life for a childhood spent acting in Disney Channel productions, and thus were understandably eager to break out of being pigeonholed. Theoretically, this would do it.

Spring Break – the event, the state of mind, the Holy Grail-like obsession – has been mythologized and pumped up tenfold by pop culture (namely MTV) over the course of my life. By now, nobody needs yet another expose on how Frankie and Annette are no longer smiling meaningfully at each other and playing guitar by the campfire. Korine, however, sprints in the other direction, a precedent set by the notorious 1995 cautionary tale Kids, which he wrote. That film told, in cinema verite style bordering on documentary, the story of a group of sexually active, terminally bored teenagers cutting a swath of negligent and grossly impersonal destruction across their NYC neighborhood over the course of a day. Kids scandalized many viewers in its day and polarized critics, who agreed they’d seen something remarkable though not on whether the film had merit, or how much, or if it should even exist. Though the two films maintain the same basic through-line – disaffected, chemically altered youth make repeated bad decisions – Spring Breakers tends to zig where Kids zagged. Kids gave its audience a ground level, seemingly authentic peek into a scary new world (and mindset) they shouldn’t be privy to, and left them troubled, disoriented, and with perhaps too much to think about. Spring Breakers is empty, glossy, pulsating and remote. It wants to duplicate the resonance of its forebear without doing any of the necessary heavy lifting.

Why are we meant to care about these characters? Because they’re young and innocent? Hogwash. The four sit around a basement early on, lamenting that they lack the funds to get to Florida, let alone enjoy it. Their solution is to rob a convenience store, a combination cash infusion and adrenaline rush that contains the most insight we are given into any of them over the course of the movie. Much of what remains, sadly, comes down to little more than hair color, which was the most dependable way I could distinguish star Gomez from her blonde cohorts. These girls barely contain two dimensions, let alone three. The leader of this vapid group of Bonnies, Vanessa Hudgens’ “Candy”, has a particularly troubling name given how thoroughly the movie objectifies her. Gomez’s character, helpfully named “Faith”, is seen mewling around a Christian youth group in the early going, and she will eventually become the first of the four to consider leaving paradise, presumably because stuff is starting to get a teency bit real and she must have a conscience rattling around in her somewhere, right? The others can’t fathom her thought process, or maybe just its existence. The cornrowed would be gangster “Alien” – a relatively effective and scarily committed James Franco – is first seen emceeing a wet t-shirt contest and later rapping badly on stage at some big event. He seems like just the kind of hustler particularly impressionable and irresponsible girls might respond to. Soon enough the Breakers, dressed in bikinis and empowering pink ski-masks, are off with Alien/Clyde in a Miami Vice speedboat to hand out retribution to a drug dealing rival. This is all very shocking of course, or so the film assures me. Time and again, Korine pushes the viewer’s face into the muck and holds it there, even as he maintains maddening authorial detachment.

If Spring Breakers was merely incompetent filmmaking, that’d be one thing, but it’s not. The cinematography is warm and often inviting, and the film is pitched like a 90-minute fever dream, a flashy, non-stop alcohol and blood-soaked reverie from which its vacant characters hope they’ll never wake up. At individual moments, it has a sweep that gathers you up and carries you along. Franco’s performance as a singularly repulsive character is at least onto something. Korine juxtaposes letters home from the girls – read in voiceover, against the backdrop of shimmering pools and Floridian sunsets, that wax rhapsodic about the amazing time they’re having – against the realities of the harm and debasement in which the girls have participated. These periodic interludes are simultaneously the most beautiful and unsettling moments of the film, and in them you can almost see what Korine might have intended. As I said at the beginning, though, I’m not sure he even knows. There’s the seed of a good idea here, one that could’ve still set new standards in provocation while possessing the depth and thematic heft to back it up. In the end, only the former translates to the screen, in trace amounts, and without the latter to buttress it, fails miserably. Spring Breakers is a cautionary tale that doesn’t appear to take place in a recognizable universe, and a deliberately fabricated lightning rod that fails to contain or conduct electricity. It is deeply unsexy, unentertaining, unthoughtful, and very often unwatchable. I still can’t quite shake the film for whatever reason, which I’m sure its makers would see on some level as victory or vindication. My advice to them: aim higher.