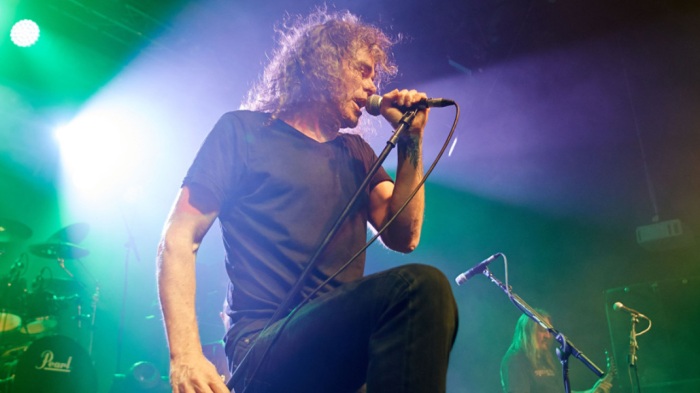 Overkill is among the great craft breweries, so to speak, in the entire heavy metal genre. Think about it. Its music is singular, memorable, and tasty, and fills a niche no one else is quite able to. Its fans are brand loyal and highly devoted. The band does lack mainstream press and wide acclaim, but is able to compete in the marketplace, more or less under its own rules. Overkill has been making its peculiar brand of sardonic, high energy thrash metal for over thirty years now. In that time, it has muscled into the overall conversation on its own merits – equal parts quality and tenacity, with a healthy chaser of Jersey attitude – yet, compared to thrash’s long-established “Big Four” – Metallica, Slayer, Megadeth, and Anthrax – the band is still relatively unsung. Through all those years, however – as Metallica famously sold out, cut its collective hair and eventually morphed into the metal version of the Walt Disney Co., as Slayer replaced its early peaks with foothills and mid-period plateaus with valleys, as Megadeth turned into some weird sideshow for which sustained musical excellence was the exception rather than the norm, and as Anthrax struggled variously to find its footing and reclaim its identity, or build any sort of new millennium momentum – Overkill has been constant, a steady, dependable, often outstanding force for metal good and an enduring DIY success story. As a fan on the inside, someone for whom the label had little to no meaning, I always thought the “Big Four” assignation needlessly reductive. In my eyes, thrash metal had no less than a “Big Six” (and compelling arguments for further expansion abound), within which I would personally include the aforementioned powerhouses – all among my favorite bands ever in spite of their wanderings – plus San Francisco’s unkillable Testament, and, of course, the mighty Overkill.*

*Hell, that would actually make Overkill a member of the “Big Four”…if listed alphabetically. ::shrugs:: One can dream.

It shouldn’t even be a question. Overkill simply belongs. It is the band, among all these legends, that is by far the most deserving of being spoken of in the present tense, but the history angle is still plenty compelling. Its accomplishments are substantial though still somewhat under the radar, having had more to do with legacy, longevity and influence than traditional awards or sales figures. I know that might seem like cold comfort to the band itself, but on a night like they recently had at Tampa’s Orpheum, where the club was packed from front to back with punch drunk grinning souls, headbanging furiously, constantly toasting the band and one another, and shouting along to both old songs and new, there’s a tribal, borderline familial, positivity in the air that is infectious. Such has been the case at every Overkill show I’ve ever seen. An Overkill ticket remains one of the absolute safest returns on investment in music today, regardless of genre. There will be smoke machines, green stage lights and strobe lights, oh yes. Founding member D.D. Verni will sling his bass low and assume his trademark entrenched playing stance, defiant and full of swagger. Derek Tailer will stalk the stage and rattle the crowd. Dave Linsk will shred and shred some more. Ron Lipnicki will remind you all over again why his addition as drummer marked such a telling and significant shift in the band’s fortunes. And Bobby “Blitz” Ellsworth will deploy his cackling banshee wail throughout to mesmerizing affect, charming the audience with his acidic banter and pouring 118% of himself into the performance. Overkill will play hard, so very hard, and every single head will bang. What has always been is how it will be, and so it was in Tampa: practically an unwritten guarantee.

Just because a seasoned fan might have a rough idea of what to expect shouldn’t fool him or her into passing on this live experience. On stage, the band is relentless fun, pure and uncut. Overkill has had its salad days and wilderness years, and now is the midst of a breathtaking renaissance. Its seventeenth studio album (not counting EPs, live albums or a covers album), White Devil Armory, is among a handful of the very best metal releases of the year. Top to bottom, in fact, it may well be the band’s best album ever, which is fairly astonishing**. After a brief musical intro, as the band slammed into the new album’s frenetic semi-title track, “Armorist”, the thought occurred to me, mid-grin, that just about everything about Overkill in a live setting is engineered to excite a rabid audience. Ellsworth is the master of ceremonies, gleeful and self-assured, repeatedly sprinting to the microphone from his hiding place off-stage right just in time to launch into the next breathless verse or chorus. He is a charismatic, kinetic force with few equals, and treats the show kind of a like a wise-ass old school NYC cabbie delighting in shepherding his charges through the very roughest parts of the city, his lyrics a non-stop commentary on the roiling chaos currently pressing in on his cramped vehicle. The music is elemental thrash metal, gut-punching, blisteringly fast, packed tight enough to burn dependably bright but written with enough craft and thoughtfulness to allow for nuance and variation. Like all metal, its mission is to infiltrate your bloodstream; unlike so many peers that have diminished or fallen by the wayside, its success rate is fairly staggering. By the second or third live song, Overkill is already almost palpably powering a good portion of its audience. The speed and intensity are piercing, and arresting. The music shoots up your spine and does medically unsound things to your neck. You cede control to it willingly.

**I remember saying just about the same thing upon the release of “Ironbound” in 2010. Damn, what a winning streak.

Overkill live is akin to a shot of adrenaline straight to the heart. “Run, run, run, like you never did run before,” exclaimed Bobby “Blitz” upon taking the stage, the band around him expertly dealing out its first of many intricate, assaultive and insinuating thrash riffs. “C’mon now, smile and die,” he entreated a hot second later, “This ain’t no more than a moment in time, so I fire!” Verni shouted in response, “Give ‘em what they’re looking for!” Merely listening to “Armorist” again (for at least the twentieth time in five days) as I type this effortlessly amps me up. Another mission accomplished. Several years ago, Overkill seemed to make a point of playing at least one song in its set from each album, but now, with 30+ years of rich, fiery history to curate, it is utterly impossible to cover all the bases adequately. The band compensates by routinely including unexpected songs alongside stalwart classics both new (“Ironbound”, “Bring Me the Night”) and old (“Rotten to the Core”, “Wrecking Crew”). In Tampa, my friend (a longtime partner in concertgoing crime who relocated there last year) and I were both stunned to hear the band dust off “End of the Line” from 1988’s Under the Influence (“Here’s a song we haven’t played since the ‘80s,” quipped Bobby), and I thrilled to the inclusion, for the first time in my memory, of “Long Time Dyin’” a crunchy, bluesy stomp from 1997’s From the Underground and Below, and one of my favorite Overkill deep cuts, if not songs overall. I frankly found the stellar new album a bit underrepresented in the set, although “PIG” and, especially, “Bitter Pill” were marvelous live examples of its power and quality. Fan favorites like “Hello from the Gutter” and “Elimination” predictably became joyous, frantic sing-alongs, as did the hilarious, infamous, traditional encore closer, “#$@! You”. Any Overkill show is, in the final analysis, nothing more than that single moment Ellsworth references in the lyrics to “Armorist”, except stretched to a length of 90 minutes+, its component parts all distinct and important, yet somehow interchangeable. What matters – all that really matters – is sustaining, and living inside of, that moment. Part of me wishes I was back there now, though I must admit I’m enjoying the memory.

I live in Central Ohio, so this Tampa date was already a special circumstance for me, but as my tenth Overkill show, it was also a milestone. A few words then, in closing, about braving Tampa’s hospitable but admittedly alien environment. It should be said that if you are specifically looking for a pretty location in which to die from alcohol poisoning, Ybor City has you covered and then some. Beautiful local girls, lovely weather (after sundown), the prominent aroma of cigars in the air, and ridiculous, competing drink specials that made my eyes cross and brain sweat just pondering them. The Orpheum itself is a nice enough space, basically a stage at the back wall, a tucked away bar, and sufficient standing room bridging all the gaps in between – sort of a pleasant amalgam of several homegrown clubs I might mention. The crowd was also rock solid, very engaged and, from where I was standing, refreshingly cool to both the band and each other. “Tampa really knows how to throw a party”, pandered Bobby from the stage, though he definitely wasn’t wrong. At a point in the middle of the set, Bobby told an anecdote about receiving an unexpected congratulatory call after White Devil Armory debuted in the Billboard Top 40 at #31, far and away the band’s highest chart position in twenty attempts. “We’re a Top 40 band!” he joked, already laughing. The audience applauded heartily. If musical popularity was based on merit, of course, Overkill would have hit the Top 40 years ago, multiple times, and such an accomplishment, which absolutely is an accomplishment for a band that has so staunchly lived, worked and played on its own terms for over three decades now, wouldn’t carry with it the tinge of absurdity we all recognized and smiled over. If musical popularity was based on merit, though, wouldn’t a band like Overkill lose some of its specialness in the trade? As things stand, I think the fans and (I hope) the band already have the better end of it.

It had been an unacceptably long time since my friend and I had seen a concert together, and, accordingly, we spent the entire ride back talking about and deconstructing the show, praising its quality, putting it in historical context, gushing over or nitpicking song choices, comparing newly purchased t-shirts and other miscellany, and, on a random tangent, wondering aloud how it could possibly be that in fifteen years of shows together, we’d never yet gotten to meet Overkill. We both agreed it was very strange. At the time, I had no idea why I might’ve mentioned such a random thing, except to keep the conversation going. The very next day, as our wait to be seated at a large local sports bar stretched past the half hour mark and well into interminability, I noticed some improbably familiar faces idling at the door, also waiting: D.D. Verni and Derek Tailer. I nudged my friend and said, “hey, look who it is.” Smiling and not a little incredulous, we pushed our way through the football fans to say hello, and to congratulate Overkill on their previous evening’s excellent work, yet another in a long line of jobs well done.