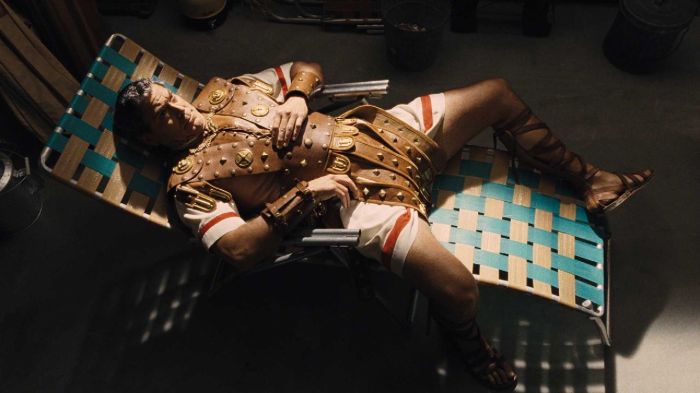 “Bless me Father, for I have sinned.”

“How long since your last confession?”

“It’s really too soon, my son. You’re just not that bad a person.”

“I don’t know, Father. I snuck a cigarette, I didn’t get home in time for dinner…and I struck a movie star in anger!”

As a writer/director/production team, brothers Joel and Ethan Coen are responsible for some of the unquestionably best and most esoteric movies of the last thirty years, a roll call – including Blood Simple, Raising Arizona, Miller’s Crossing, Barton Fink, Fargo, The Big Lebowski, No Country for Old Men, and Inside Llewyn Davis, among others – consisting of equal parts unvarnished Oscar bait and uncompromised wish fulfillment as high art, even if the wish itself sometimes seems culled from common stock. Part of the joy of following the Coens’ career has come from the fact that their pictures are so patently unlike anyone else’s, although they do display a tendency toward circular self-reference – perhaps unintentional, perhaps not, depending on the title – the further into their filmography one ventures. I am not the type of dedicated follower, a “Coen-head” for lack of a better, less embarrassing made-up term, that hangs on each and every move the brothers make, though I am forced to concede that even their films whose concepts don’t immediately grab me or potential doesn’t strike me as self-evident still garner reflexive notice and consideration that I never afford to other filmmakers. Three decades invested in building a private cinematic wonderland has earned the Coens that much unspoken respect. I will also say that, whenever I do see one of their movies, it almost inevitably calls to mind memories of one or more of their previous projects, while making me unreasonably hungry to see something else that might have, until now, slipped through personal cracks. For example, Hail, Caesar!, a surprisingly yet appealingly lightweight satire of Hollywood at the height of the studio system, with a few heftier concepts subtly mixed in, had me as consumed with various established points of reference and/or pondering other unexplored avenues as it did with simply being entertained in the moment. The most independent, muse-following voices of their generation – your Coens, your P.T. and Wes Andersons, etc. – have to understand that it’s especially delicate work, making art in a self-constructed echo chamber. 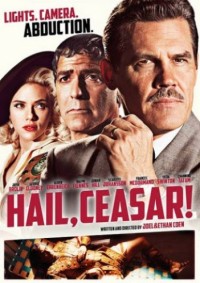 If the Coens can generally be said at any given moment to be operating in one of two occasionally overlapping modes, prestige and playtime, then Hail, Caesar! belongs firmly to the latter. Part film noir, part musical, part three-ring circus, the movie doesn’t trouble itself with a plot per se, instead presenting with minimal (explicit) comment a particularly busy day in the life of Capital Pictures’ resident fixer, Eddie Mannix, who Coen brothers vet Josh Brolin amusingly portrays as a no-nonsense people person, an unflappable, can-do company and family man who lives for his work but conceals that knowledge behind the sort of stoic, implacable exterior that is likely quite valuable when dealing with the needy, narcissistic, and temperamental on an hourly basis. As Capital’s Head of Production, Mannix – introduced on a rare dark and stormy SoCal night smoothly extracting an ingenue starlet from an unsanctioned suburban “photo session”, then bribing the attending officers to sweep it under the rug – must interface constantly with the artiste, corporate, and media classes, managing a steady diet of pressures from above, below, and outside. Capital boasts perhaps the most active backlot seen in a film since the climax of Pee-Wee’s Big Adventure, with at least five movies under concurrent production, the centerpiece of which is Hail, Caesar!, an ostentatious, straight arrow biblical epic starring noted dim bulb playboy Baird Whitlock (George Clooney, milking his bona fides as Hollywood’s preeminent formerly eligible bachelor for almost all they’re worth) as an irascible, high-ranking Roman general grudgingly coming to awestruck terms with the supernatural truth behind the legend of local social worker/rabble-rouser Jesus Christ. When Whitlock is drugged and then abducted by shadowy figures at the most critical time in Caesar’s costly shooting schedule, Mannix must both spearhead the search and coordinate damage control, while also juggling home life concerns and the self-centered demands of half a dozen or more highly entitled weirdos.

Recounting the bare bones story for this review had the odd effect of making me want to see Hail, Caesar! again immediately, though during the film itself I found myself quite often distracted, forever waiting for the first serious shoe to drop. A botched kidnapping was, of course, also at the center of the Coens’ masterful 1996 frozen noir Fargo, but the tone and behind the scenes intentions there were 180 degrees different. Hail, Caesar! never considers Whitlock’s disappearance to be anything more than a standard plot lever. There is an ingratiating strangeness to his captors, granted, which brought to mind the way the various antagonists in the far superior Big Lebowski got progressively weirder as The Dude’s situation escalated, but still never any particular sense of danger – often the diametric opposite – or, as would naturally follow, high stakes. The idea that a famous actor might come within arm’s length of scandal, or that a tent pole Hollywood production should accidentally get its mega-budget blown out of the water, isn’t sufficient cause for excess audience investment or concern (indeed, Mannix first tries to procure the $100,000 ransom – in 1951 money, remember – from office petty cash). The Coens, to their credit, seem to recognize the plot is a complete trifle, and actively invite the audience to utterly disregard it, instead seizing perhaps their best chance yet, in a career littered with winning widescreen/technicolor displays of creative self-satisfaction, to indulge their love of big, brassy, almost non-sequitur set pieces – witness a grand, Esther Williams-style synchronized swimming spectacular, a full-on Busby Berkeley dance number, or a gravity and logic-defying Gene Autry-vintage old west trick riding and shooting display – with minimal explanation required and even less offered. After about a half hour of uncomfortable narrative flailing between high and absent-mindedness, Hail, Caesar! sprints in the latter direction. How much fun you might have will depend on how fully you are able to embrace that decision.

Cushioning the landing, as farce turns to spoof and, from there, into so much thin air, is an enviable roster of modern on-camera talent, all putting their best foot forward and clearly having fun amid the silliness. Scarlett Johansson and Channing Tatum play up and exactly to the platonic physical ideals their respective (Capital) film roles as a blindingly luminous mermaid and a randy, singing sailor on his last night before shipping out require, before turning them on their heads. Ralph Fiennes is spectacular as the perfectly-named Laurence Laurentz, a cultured British auteur with the patience of Job, mortified at being forced to teach Acting 101 to his hopeless new star – a friendly country bumpkin (Alden Ehrenreich) plucked from celebrity on the Saturday afternoon kiddie-western circuit and shoehorned, in a stunning example of tone deaf executive overreach, into an austere chamber drama entitled Merrily, We Dance. The sequence where the two stumble their alternately posh and twangy way through the proper line delivery of, “would it were that simple” is a deft and delightful train wreck/verbal duet. Fiennes as Laurentz would be the haute and hilarious center of a different movie, though Brolin shines as a straight man extraordinaire. As the oft-befuddled but still confident Whitlock, Clooney gets to trade on his perceived status as a smug do-gooder in addition to his overly amorous past. It’s perfectly plausible that, as the hostage crisis unfolds, or, rather, unravels, his sheltered movie star might be impressed by a room full of faux revolutionaries at the same time his own innate charm temporarily makes them misplace their unshakeable ethics in favor of a select audience with a Hollywood raconteur. Obviously, it helps when you’re George Clooney. Stars clamor to work with the Coens today with the same reverence and zeal they once reserved for a shot at a Woody Allen movie. How else to explain eye-popping cameos by a deep incognito Frances McDormand as a chain-smoking film editor, a monotone Jonah Hill as an all-business notary public, or Tilda Swinton as a pair of towering, officious, incrementally severe gossip columnists?

It’s a nifty trick to make a film at least ostensibly concerned with Hollywood scandal, international espionage, and multiple families in crisis feel completely inconsequential, but Hail, Caesar! pulls it off with remarkable gusto. I was rarely overly involved, but also never bored. With its multiple movies within a movie and associated off-set intrigue, Caesar never lacks for surprising or bemusing action – a dance number is apt to break out at one moment, a heart-rending soliloquy the next – though rarely without the on-screen cameras rolling. The Coens try to mask the film’s overall lack of substance with the aforementioned star power, plus cute parlor tricks – Michael Gambon, channeling “Dumbledore at his gravest”, delivers florid, overarching, incredibly unnecessary narration that posits the studio not merely as a cliched dream factory but something akin to an enchanted kingdom – throwaway jokes (a squeaky shoe, an uncloseable door) given so much space and repetition that they improbably mutate into actual comedy, and the numerous intangibly inspired moments Joel and Ethan bring to their every production from capacities both in front of and behind the camera. Even when a Coen narrative flags or flattens, its purely creative and technical merits are impeccable. These may manifest themselves in terms of shot composition – as when the camera enters a cavernous room boasting a panoramic coastal view, completely empty, save a hulking, taciturn, fat man at its dead center, and, at his feet, a pirouetting little dog barking its head off at our intrusion – or in fast-talking, symmetrical stage conflict – as when one of Hollywood’s original focus groups, comprised of four dogmatically opposed but surprisingly amenable clergymen, assemble at a cramped conference room table to critique the script’s depiction of Christ. The Coens are so intent on flexing their artistic muscles and having mannered fun that there is little use for resistance. “Squint against the grandeur!” comes a helpful late piece of direction to Whitlock, and it’s good advice. Hail, Caesar! is a slight but sly feature-length oddity, calorie-free but perfectly entertaining, a loving tribute to a bygone era, exactingly crafted, craftily brought to life, and gone before you realize exactly what’s hit you.