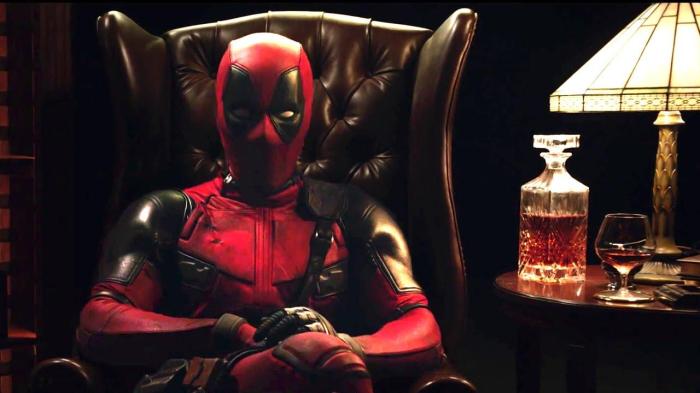 “What if I told you we can make you better? You’re a fighter. We can give you abilities most men only dream of. Make you a superhero…”

“Just promise me you’ll do right by me, so I can do right by someone else. And don’t make the super suit green. Or animated!”

There is a level on which practically any information I divulge about Deadpool below the purely superficial could be construed as a spoiler, so I must be especially light on my feet – or, at any rate, more careful than is the man of the hour, a shoot-first, quip-second, slash-third, wash-rinse-repeat rolling ball of destruction with a delightful tendency to leave any room he enters looking like a smoldering ruin and/or the aftermath of a successful large-scale weapons test. Yes, I plan to tread carefully. Luckily, the film is such a riot of rapid fire sass, fury, and invention (and bullets!) that it doesn’t have to pivot on plot in order to surprise. You can take it from me that Deadpool has lots to spring on what will either be its fully primed, giddily anticipatory or, failing that, completely unprepared, fairly aghast audience. Much of the movie’s appeal undeniably lies in its conspicuous lack of a middle ground. Viewers will either find themselves swept along for the ride or else forcibly swept aside. The film, as by now has hopefully been widely disseminated, is, of course, a bubbling cauldron of “hard-R” signifiers – seriously salty surgical sarcasm, overly cheeky (had to say it, sorry) borderline gratuitous nudity, copious amounts of gore in near-perpetual flight from various (and numerous) gun or sword wounds – but that’s only part of the story. Deadpool is, oddly, surprisingly, pleasantly enough, just about as original as a superhero movie can be anymore, if not necessarily in its underlying tale then in the manner in which it’s told. After about a decade spent wriggling out of developmental purgatory and into his fulfilled destiny on the big screen, the filmmakers are clearly smitten with this wiseacre character and the slightly off-kilter world he so gleefully and thoroughly shoots full of holes. In front of and behind the camera, everyone just sells the hell out of it. 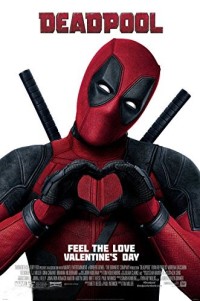 Indeed, there has never quite been a superhero movie like this. The film announces its intentions right up front with a disorienting, highly unorthodox (and fun) opening credits sequence, a freeze frame montage capturing moments of seemingly zero gravity utter chaos scored to the 1981 Juice Newton power ballad “Angel of the Morning” – the first of several obscure but winning soundtrack choices, and the only one I’ll name here – in which not a single principal player is identified by name but, rather, referred to obliquely in only occasionally flattering ways. It’s a definite tone setter. Once upon a time, when protagonists like Ferris Bueller or Tyler Durden would exploit a break in the action to speak directly to their audience, it qualified as a nervy narrative device. Deadpool, the former Special Forces operative turned cynical, hyper-sardonic mercenary turned disfigured but unstoppable mutant killing machine, embraces as practically his second vocation an unholy, wholly irreverent mixture of MST3K-style movie commentary, Ricklesian mega-heckling, and trash talking that would make an NFL diva blush. Though we never see his lips move, we never have to. “Mr. Pool”, as the starstruck cabbie he keeps on speed dial calls him, also cuts a striking visual silhouette, with his weirdly expressive ivory-white, iris-free eyes, Spider-man-adjacent head-to-toe black-accented red costume (“so the bad guys don’t see me bleed”), and dual katana swords strapped across his back in an “X”. The movie – which lurches both forward and backward in time throughout but impressively never loses either its place or its momentum – starts where most would end, with Deadpool en route to a long-awaited rendezvous with his arch-nemesis, Ajax…and is he ever excited, regaling/riddling the audience and his ad hoc chauffeur with bits of scene-setting exposition, intriguing backstory, random asides, and a barrage of biting bon mots that hint rather loudly at the fate worse than death promised to his foe. Of course, it’s not bragging if you can back it up.

This lusty predisposition toward unsolicited commentary points toward an explanation of why Deadpool is more fun than your average superhero movie, but, again, tells an insufficient story. There are explosions, certainly, and the requisite impossible feats, but the film also seems to argue that audiences don’t merely need to sit in awe of, and be pummeled by, superpowers on perpetual display. The movie treats its emergence into Hollywood’s traditional late-winter dumping ground almost as a dare, and arrives instead a well-considered, technically proficient, endlessly entertaining party-crasher. It feels miraculously untouched by powers of the sort that almost micromanaged Marvel Studios’ Avengers: Age of Ultron into complete incoherency and seem, somewhat alarmingly, to be doubling down on the upcoming Captain America sequel. With its limited scope that turns on a dime from liability into strength, a laser focus on character, in tandem with rather than subservience to spectacle, and a demonstrated willingness to “go there”, Deadpool is arguably among the most purely entertaining superhero movies of all time, even if its manners might preclude an invitation to sit at the grown-up’s table otherwise. It feels like the filmmakers have gotten away with something here. Through it all, the “Merc with a Mouth” never shuts up, or stops showing off, or having fun – star Ryan Reynolds walked through the fire of ignominious superhero slumwork, starring in the dire Green Lantern and appearing in a bit-part as Deadpool with his FREAKING MOUTH SOWN SHUT in X-Men Origins: Wolverine*, to get here, and pours every bit of charisma and physicality he can into what is obviously a labor of love – though the engine of the film is actually his troublesome, and indomitable, heart. Just when the wiseass mercenary appears to have found serendipitous, remarkably true love with nurturing, unreformed party girl Vanessa (Firefly’s Morena Baccarin, continuing her tradition of imbuing unfortunately peripheral characters with uncommon depth), a terminal cancer diagnosis forces his hand into unconventional treatment that leaves him scarred, and irrevocably changed, for life. Good thing he has a sense of humor.

*There, I officially (still only partly) spoiled the turgid “X-Men Origins: Wolverine” for the, at best, one of you who was planning to see it, maybe, at some point during the next decade. Take it as a gift.

If Marvel Comics’ modus operandi has evolved over the years into something along the lines of, “Superheroes with problems”, Deadpool pushes that mission statement the farthest yet. The approach pays immediate dividends. Just as Peter Parker is more relatable out of costume because he’s an awkward, lovelorn teenager, or Tony Stark a millionaire playboy with a pronounced, self-pitying drunkard streak, wait until you get a load of Wade Wilson’s travails. The fabled “fourth wall” of narrative integrity isn’t the only barrier Deadpool is unconcerned with breaking.** The film lays the super-soldier turned barfly fairly well open emotionally, and invests equally in his nebulous, crude, and cranky past as a freelance do-mostly-gooder, his charmed, and raunchily charming, romance with Vanessa, his subsequent physical decline and truly harrowing superhero origin story, fledgling first steps into a new reality, and, finally, his enthusiastic but, admittedly, not terribly thought out plan for revenge. Every step of the way, the character’s naked emotional availability makes him highly sympathetic. Marvel’s bench of reserve mutants remains impossibly deep, even when the home team is nowhere in sight. As the odious and sadistic Ajax, Ed Skrein – first/last seen by me doing an entirely passable Statham approximation in the braindead but inoffensive Transporter Refueled – fights alongside brute henchwoman Angel Dust – one-time MMA comet turned C-movie action star Gina Carano, proving the screen presence she displayed in Steven Soderbergh’s Haywire wasn’t a fluke – and makes for a far more competent and formidable villain than some fanboy complaints have yet allowed. Deadpool is aided in his quest by the intimidating yet overly polite (“Language!”) veteran X-Man Colossus and uncontrollable ball of fire/fundamentally unimpressed Millennial teenager Negasonic Teenage Warhead, and they banter, bicker, and bound along like any improvised family. Deadpool keeps its focus at eye/street level and trained on its main character’s essential humanity, imparting upon any contractually-obligated pyrotechnic displays a sense of personal audience investment that holds even when the air is thicker with sniping crosstalk than armor-piercing bullets.

I already forget how Tim Miller was described in the opening credits, but the video game effects wizard deserves genuine plaudits for his live-action directorial debut, not simply for deploying and defining an engaging visual language but almost immediately beginning to challenge audience assumptions about it, in terms of both onscreen carnage and milieu. Deadpool largely takes place in overlooked corners of the world – seedy bars (comedian T.J. Miller does great work as Wade’s laconic barkeep confidante), dimly lit loft apartments, even more poorly lit skid row laboratories, and, as the piece de resistance, a dingy shipyard that quickly devolves into a dingy scrapyard – that apparently fall well outside the mandate of either the X-Men or Avengers to protect. At its fevered heights, Deadpool is a busy yet comprehensible frenzy of 360-degree kineticism where, for perhaps the first time in movie history, slow motion photography holds no inherent advantage over its full motion counterpart, in large part due to the demystified accessibility of its still impressive action. Deadpool’s aerial attack moves resemble a singularly motivated, suspiciously well-armed Olympic high diver in multi-tasking, magazine-emptying mid-descent. If that sounds cool, then is this ever the movie for you – sly visual poetry, punishing verbal interactions, and even a good, hard tug at the heartstrings. Deadpool isn’t quite a masterpiece, though it does go about its business masterfully, nor a paradigm shift, merely a superb outlier. Those so calling it are rightly excited over a superhero movie that not only rails mightily against genre conventions but subverts them with a level of feeling, technical skill, and ingrained personal satisfaction so palpable that it bleeds off the screen and infects the audience. Its record-shattering opening weekend no doubt already has producers everywhere breathlessly preparing their own hard R-rated superhero epics. I sincerely hope they fail. Deadpool himself constantly rebukes the hero mantle. He’s a one-of-a-kind, not a role model. Why would anyone want to make the mistake of putting him in the same sort of box? A singular movie like Deadpool should be cherished for what it is, not held up as an overt example for others to follow.