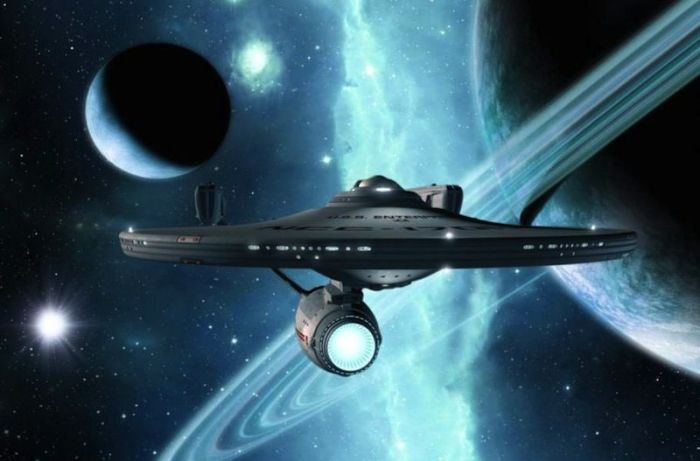 NOTE: This piece is not intended to be a full review of either 2013’s Star Trek Into Darkness (which I really liked) or 1982’s Star Trek II: The Wrath of Khan (which I love beyond reason), merely a sort of brief, high level compare/contrast between the two and musing on how the requirements of modern blockbusters are adversely affecting the established properties they’re rebooting. There are no spoilers below for Into Darkness, which I cannot wait to see a second time. If the fact that Mr. Spock dies at the end of Star Trek II, selflessly sacrificing his life to allow the Enterprise to escape supervillain Khan’s final assassination attempt, qualifies to you as a spoiler, I have no sympathy. Seriously, Wrath of Khan is 31 years old this year. Surely there’s time to watch something besides “Honey Boo-Boo”?

I like J.J. Abrams, and I fairly love his adrenalized take on the recent “Star Trek” reboots, which replace camaraderie and contemplative space exploration with fast patter and CGI-fueled high adventure. Still, I saw The Wrath of Khan on the big screen last night and can happily confirm, even coming so soon after my own recent trek Into Darkness, that it remains my high water mark of the series. If all you remember about the film is Shatner shouting “KHANNNNNN!!!”, Spock dying, and Mr. Rourke (look it up) chewing scenery by the truckload, you’re in for a very pleasant surprise. Not only does Shatner underplay Kirk at almost every other opportunity, it is also remarkably effective. This Kirk is not the slowly learning glory hound of Abrams’ films, nor the self parody he’d lapse in and out of in later years. This Kirk has responsibilities and regrets. Nimoy matches him scene for scene, playing Spock at his serene, philosophical, iconic best, even as he sacrifices his life for the good of his friends. Ricardo Montalban earns his spot in the Villainy HOF for his portrayal of Khan as a walking open wound, coolly intellectual and smugly superior until overridden by his bubbling hate. Kirstie Alley also does good work in her high profile film debut as conflicted “by-the-book” Vulcan Lieutenant Saavik.

Khan is largely a device thrown in whenever the pot (or plot) needs stirring. Montalban plays him unbowed, with a regal air, and is so magnetic in his comparatively limited screen time that I wish the film had longer to spend with him. The verbal confrontation between captains after Khan ambushes the Enterprise under a flag of peace, only to have Kirk later outwit and turn the tables on him, is my favorite sequence in the movie, but the relationship between Kirk and Spock is its heart and soul (this is something the Abrams reboots have also seized on, happily). The two collaborate and exchange truths, scheme and spar gently as friends do. Kirk and Spock’s conversations are wonderful and easy, indicative of the long, battle-tested friendship the two have built over the course of the series. Spock’s final sacrifice still moves me. His dying conversation with an apoplectic Kirk is so firmly rooted in the characters of both men that it barely even sounds like dialogue. It feels as cut to the bone real as I can imagine a film set in the 23rd Century possibly can. Kirk’s eulogy never fails to bring a tear to my eye. We feel his existential anguish, his duty to press on straining against grief he can’t quantify or properly display. Anyone who says Shatner cannot act and never could has either never seen this movie, or hasn’t seen it recently.

So indelible are these performances, and, beyond that, these characters, that it’s to the credit of Abrams and his talented cast how much emotion and fun the reboots are able to squeeze out of this idea. The cast acts and even kinda sorta looks like the iconic original crew. In broad strokes, this reads like an ill-advised Off-Off-Broadway revival of “Star Trek”. In practice, it’s pretty great, raucously entertaining in its own right, and not a little thrilling. This is a tricky line to tow, reverence for the past vs. looking to the future. This summer’s “Superman” reboot, with its apocalyptic strurm und drang, clearly preferred the latter. For all the complaints still coming in from Trekkers, remember that Abrams – who has the budget and studio backing – could easily have just blown up the franchise and started completely fresh. Instead he tried to strike more of a balance. For that I am forever appreciative, and a fan going forward, though I still have the sad task of informing him that he will only, at best, ever participate in the second most awesome film in the Trek cannon. And, FYI, he hasn’t made it yet.

For an example of why Wrath of Khan is #1 in both my book and my heart, and a little of what has been lost in the transition from original crew to original crew 2.0, consider this throwaway exchange between Kirk and McCoy, delivered as they nervously contemplate beaming into what well may be “the center of a dead planet” to pick up the trail of a team of scientists terrorized by Khan and now missing:

MCCOY: “Going? WHERE are we going?”

KIRK (nonchalantly): “Where they went.”

KIRK: “Well, then, this’ll be your big chance to get away from it all.

Just a throwaway exchange, and I love it. It’s calm, clever, breezy and charming. There are excellent dialogue exchanges in the reboots as well, but relatively few that seem wholly organic and not tied to some harrowing piece of action exploding around the principals in real time. The original “Star Trek” films were not exactly low budget affairs. They merely come from a time when not everything that could possibly be shown on a film screen necessarily had to be. Even the “Next Generation” series of films of the ’90s and early aughts looks quaint if not primitive next to the visual onslaught of Abrams’ dynamic duo. At its best, though, “Star Trek” is just as much about words as it is deeds, about adventure over action, and always more about characters than explosions. We’ve seen hints of that in this new series, enough for me to smile in recognition, relax, and get about the serious business of having fun at the movies, fairly secure in the idea that these filmmakers realize how much it’s all connected.

Star Trek II: The Wrath of Khan is gloriously character-driven, nuanced, involving and marvelously assured. In the final analysis, it’s just a terrific entertainment, 31 years to the month I first saw it in the theater with my Mom (how those burrowing earworms freaked me out as a kid). Movies may get bigger and louder with each passing year, but they’ll never fully drown out the lessons of the past. With this series, at least, there seem to be guardians who are still attuned and occasionally pay the right kind of attention to distant echoes. May they live long, and also prosper.