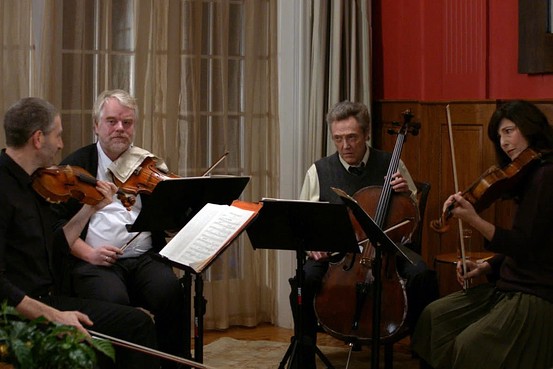 “Casals emphasized the good stuff, the things he enjoyed. He encouraged. And for the rest, leave that to the morons, or whatever it is in Spanish, who judge by counting faults. ‘I can be grateful, and so must you be,’ he said, ‘for even one singular phrase, one transcendent moment.’”

Yaron Zilberman’s A Late Quartet contains as much useful insight into what it is to be a professional musician as any movie I can recall. It also fairly vibrates with the passion with which aficionados of classical music feel and play the music they so love and internalize, a passion which pulses and propels, but also on occasion spills over walls and poisons wells. The film may be flawed in its construction, but those flaws only really reveal themselves later, and, that said, it is still rarely ever less than fascinating. The members of its titular ensemble, a celebrated classical string quartet preparing for its 25th anniversary season opener, obviously have that quarter century of collaboration, and interpersonal experience (some of it marital, we discover, and some of it parent-child), in common at the minimum, but so many years locked into such an intimate, pressure-filled and expectation-fueled working environment seem to have finally exacted a toll. Fear and resentment and dissatisfaction can only ever stay buried for so long.

The film begins as the quartet takes the stage for that seemingly unreasonably tense season opener, but it doesn’t linger there, instead establishing the concert for later and then flashing back to the season’s first rehearsal as its true starting point. The old friends gather at their founding cellist’s home and chat more or less convivially, they toast their success and the season ahead, then settle down to play Beethoven’s “String Quartet No. 14, Opus 131”, a daring and deeply metaphorical seven-section suite that must be performed without a break. In a matter of moments, the film not only establishes the four as superb and confident players, which is crucial to what follows, but also crystallizes the group dynamic to which they are all reverent and subservient, albeit in different ways and to different degrees. We are introduced to the quartet before we know the first thing about the people who comprise it, which is an interesting way of prioritizing it in the story to come. I never cared particularly about the quartet’s achievements, cache, or future, but what is important to the film is that its characters do care, intently.

After some requisite tuning, level-setting and warming up, the quartet launches into “Opus 131”. In its fits, starts and chatter in between effortless highs, the practice draws shorthand sketches of the four principals – First chair violinist Daniel, a moody perfectionist played with alternating blanket aloofness and blanket intensity by veteran TV actor Mark Ivanir; Second chair violinist Robert, played as a delicate, combustible mixture of yearning and resentment by Philip Seymour Hoffman; Violist Juliette, who, in Catherine Keener’s hands, is a steady traditionalist, surprisingly capable, beneath her veneer of stability, of being wounded, and captive to regrets decades old; and Christopher Walken’s founding cellist Peter, 30 years their senior, who fumbles with his fingering and dexterity throughout the challenging piece, leading him to fear the worst, and once it is confirmed, reconsider his life. More details are filled in, via the half-clumsy, half-inspired device of a documentary filmed in happier, less complicated times. Juliette was taken in as a young music student by Peter and his late wife, who became a surrogate family to her. Robert and Juliette married in the quartet’s early days. Their daughter Alexandra, played by Imogen Poots, grew up the child of these wandering, itinerant musicians and carries her disappointment at their absence from her life like a long-term grudge. She is a student of Peter’s in school and of Daniel’s privately. And so on.

When Peter is diagnosed with the early stages of Parkinson’s Disease, his immediate future, and, by extension, bedrock relationships within the quartet, as well as its ability to sustain and function, are all thrown into turmoil and sharp relief. We have already seen Daniel, with his furiously notated “Opus 131” sheet music, clash philosophically with Robert, who asserts that, to world-renowned musicians, playing “Opus 131” without any sheet music would be “a risk worth taking”. Robert is increasingly disgruntled at what he sees as decades of sublimating his own talent as second violin to an elitist control freak who considers himself superior. When Juliette is forced to take sides in the burgeoning conflict, she finds both her loyalties and assumptions about herself and her marriage challenged to the breaking point. A Late Quartet is pitched at a particularly quiet intensity, intimate and unsettled and befitting the music that fills both its soundtrack and its character’s lives and obsessions, so the mistakes and revelations that follow are far less surprising than the film thinks they are. These are all supremely driven characters, with a schedule and a status quo to maintain, and a standard of artisanal quality to zealously uphold. If only, the film seems to be saying, real life was ever half so easy, or rewarding, as that hour these four spend performing together on stage.

Some later developments of A Late Quartet gave me pause. The initial mistake Robert makes is a highly predictable one. The entanglement in which Daniel finds himself is both telegraphed and not a little groan-inducing. A mid-film argument between Alexandra and Juliette rings particularly hollow because so little time is spent setting up their relationship before it is suddenly exhibit A in an explosive daughter-mother cross-examination. These are structural screenplay problems, issues of shoehorning in excess conflict or mistaking brevity for subtlety. The film is, indeed, briskly paced, and mostly uses that as an asset, but though Zilberman has much more to say about the psychology of a world class musician and the dynamics of a group of them at cross purposes than he does about more conventional trials of the heart, he nevertheless thinks everything must be included. It helps that the performances are, at times, so excellent. Hoffman is one of the preeminent character actors of his generation, of course, and his Robert slides believably between the twin poles of rebellion and appeasement, smugness and bemusement, yearning and resignation, between being hurt and victimization. Note the spectrum of emotions Robert experiences in a thirty-second span as the quartet’s penultimate rehearsal devolves into a series of revelations. Hoffman makes no appeals or apologies for what it is a multi-faceted and difficult character, but he also never makes him less than understandable. It’s a subtle job of tightrope walking that ranks with the best work of his career.

The other characters are more defined by their limitations, and the actors do as much as possible within those parameters. Ivanir’s Daniel is a monstrous ego contained in a stoic exterior. When, after holding the world at arm’s length for so long, he finally allows himself the possibility of non-musical connection with another person, it both shakes and supercharges him, and it proves interesting to watch the perfectionist overextend himself. As Juliette, Keener must serve as caretaker of almost half a dozen relationships – with her husband, her mentor, within her professional partnership, with her daughter, and her legacy – and make hard choices about which ones, if any, are worth fighting for. Poots’ Alexandra is whipped up in youthful discovery and cannot trust, or even really know, her own heart. Walken’s Peter is a proud, dignified master musician in autumn, seeing the world, his collaborators, his future, and his life’s work through eyes which have had the scales fall finally, heartbreakingly away. We’ve become so attuned to Walken’s procession of eccentric, mannered and/or threatening oddballs over the years that to see him flourish in a generally flash-less performance as a man awash in doubt and memory is intoxicating, and is the movie’s true revelation, independent of either that last messy rehearsal or the emotional finale of the opening night concert.

If it seems I have focused more on characterization and performance than plot when, as in Walken’s classroom lesson quoted above, I emphasize the good stuff, it’s with good reason. A Late Quartet hardly takes a false step for its first half, and balances the needs of plot and characterization with rare ease. It takes us into a fairly fascinating world inhabited by ambitious, terribly specific musicians who nevertheless still often function more as types who have pretensions to becoming full blown characters. When the film does finally fall victim to plot conveniences, or piles on plot contrivances, it stumbles but does not fall, buoyed by the grace of its ensemble, not unlike the quartet on stage. The pacing of the second half is off, and the ending is a rare case of being both enigmatic and overly tidy. On the other hand, Hoffman and Walken do simply marvelous work, and are well supported, in a thoughtful story of the intersection of exceptional talent and mundane life. A Late Quartet is not a great movie, but it does contain greatness. Only when the film strives to be more than it is does it fail…and it’s all the more interesting for that fact.