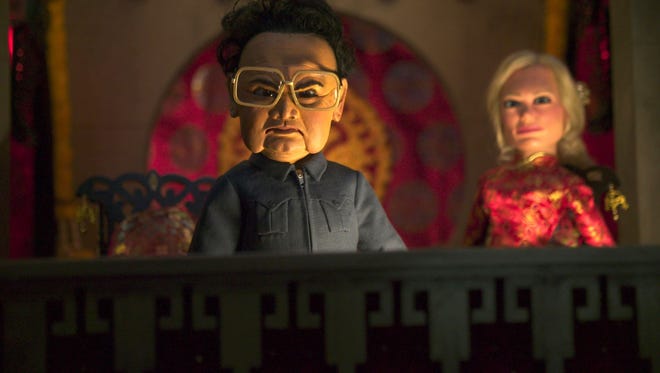 “You walked out, Gary. The team went on a mission without you, and, without an actor, they were like pigs to the slaughter! I’m supposed to leave the fate of the world in your hands?!”

Film animation is the great enabler. Untether any movie from the bonds of the “real world” and suddenly its creative possibilities increase tenfold, provided, of course, that the audience buys into the process and accepts the change of venue. Among animation styles, almost every one of which – Disney’s traditional cel, or Pixar’s computer, Nick Park’s Claymation, or Henry Selick’s stop motion craftsmanship – has credibly created rich alternate universes on screen, marionette puppetry is surely among the least used and therefore most novel. There are numerous practical reasons for this, namely the insane amount of work necessary to make marionettes look or behave with the least bit of realism. In 2004, Trey Parker and Matt Stone, already by then unlikely giants in the field of animated television, sought to use the distracting fakeness of marionettes to their advantage, creating a blatantly artificial movie whose aim was to spoof Hollywood action movies while also satirizing American jingoism, exceptionalism and self-importance as mercilessly as possible. That they were only fitfully successful doesn’t make their efforts less admirable (depending on your taste and outlook) or any easier to dismiss. 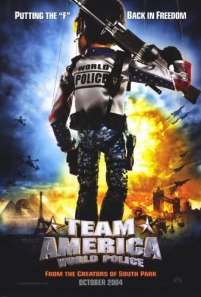 Team America: World Police is on the shortlist of the most cheerfully, pointedly vulgar movies ever made, and I can’t think of a film widely released this millennium that is its equal. I’ve only ever seen the “Unrated” version, but one imagines Parker and Stone attacking the outer limits of the R rating with deadly purpose. This is a movie that disqualifies ¾ of its potential audience by the time it is ¼ over. Its titular team is a hard drinking, loving and charging squadron of self-appointed “World Police”, who doggedly pursue terrorists across the globe, proactively wading into the mire with brio but rarely if ever foiling plots, and leaving a trail of ironic destruction in its wake. In between missions, the Team takes on the look and feel of a bad soap opera cast, allowing Parker and Stone to overindulge their love of turgid and absurd melodrama. As the Team recruits Gary, a Caucasian Broadway star, into its ranks on the dubious logic he’ll be able to “act” his way into the confidence of Middle East terror cells, North Korean dictator Kim Jong Il seeks to leverage a guild of supremely self-involved film actors (a well-intentioned cult of personality led by Alec Baldwin) as a mass distraction under cover of which he can detonate WMD worldwide.

The movie’s list of targets is perhaps too expansive (its “Film Actors Guild” is comprised of a dozen+ specific outspoken celebrities), and its message seriously muddled. More troubling, given its pedigree, is that Team America is, at best, only sporadically funny, though its delivery is as direct as a punch to the gut. If you ever lost sleep worrying that Kim Jong Il’s outward antagonism hid a wounded, delicate psyche, or postulating that Alec Baldwin was somehow plotting world domination in between lattes and self-aggrandizement…heck, if you ever wondered what explicit puppet sex might look like, then Team America filled in those mental blanks, and so many more. That extreme patriotic fervor might prove just as dangerous as beneficial was not exactly a groundbreaking idea, even in 2004, and America took plenty of criticism for its apparently self-styled role as the world’s policeman in the wake of 9/11. Parker and Stone have never been timid around sacred cows. Team America addresses a messy moral conundrum by converting it into an even messier free-for-all, unorthodox and almost wholly irreverent. The key word is almost. It’s worth a look and a chuckle. Just don’t expect coherence. Or restraint.

That the film exists at all is a tribute to just how hot and successful creators Parker and Stone were at the time. In 2003, South Park was already in its seventh season, and producing some of the best episodes of its run, edgy, audacious, and playful as ever. It’s tempting to see South Park and Team America as artistic drains on one another, but if an issue ever existed, the traffic only flowed one way. The latter was a fairly clunky and awkward contraption, the former a comparatively well-oiled, and, on occasion, blisteringly funny machine. There was no real crossover in terms of animation style – though, despite the care involved, both were calculated to look cheap – and how (and where) the best jokes would land never seemed in doubt. South Park obviously had a much surer sense of itself, its humor, its characters, its setting, and its worldview. Team America seemed almost to be making things up as it went along, which imparts an interesting improvisational feel to the first half hour that quickly dissipates as the plot lurches along. As Parker and Stone continue setting up their procession of targets and priming them for obliteration, it doesn’t take long for fatigue to set in.

Parker and Stone’s M.O. has always been to take the air out of everybody’s balloon at once (hence the Team’s appetite for both irresponsible, large scale destruction and interpersonal melodrama; its high tech, not at all secret base built behind the faces of Mount Rushmore, where spy planes literally fly into and out of Lincoln’s mouth; the movie’s, um, scattershot approximation of Arabic speech; its overly heavy-handed parody of Broadway treacle; or Kim Jong Il’s ominous warning, delivered late in an oddly familiar, stereotypical Asian dialect*, that, “when you see Arrec Bardrin, you rill see the true ugriness of human nature”), but they still only have the one, high concept, and the seeds of a few other good ideas to build around it. Team America is not structured as a musical – as was the South Park movie, or Parker and Stone’s subsequent Tony-winning triumph The Book of Mormon – but it nevertheless makes room for numerous cues, the most enduring of which is the Team’s de facto theme song, the hyper-patriotic rock anthem “America…F#$% Yeah!” In moments like that song’s cold introduction, Team America, much like the South Park movie before, carries with it the shock of the new and makes a real impact on its audience. The other songs are a decidedly mixed bag – the overly countrified heartstring-pulling of “Freedom Isn’t Free”, the rousing 1980s tribute “Montage”, Kim Jong Il’s confessional “I’m So Ronery” – but, unlike South Park, they tend to distract rather than focus the narrative. Overall, the quality just isn’t there, in either songwriting or deployment.

*Kim Jong Il, of course, shares a voice with Mr. Liu Kim, the put upon proprietor of South Park’s City Wok restaurant. Give him a call sometime. I hear the “City Chicken” is excellent.

Visually, TA: WP has the feel of a dare to it, as if Parker and Stone were sitting in a writer’s room one day brainstorming the most difficult technical concepts to translate to film, busted out in laughter at the idea of marionettes and then, after the high fives had faded, gave each other a suddenly determined look, and plowed ahead in defiance of common sense. From the ground up, the world they create is both deliberately fabricated and meticulously rendered, filled with bustling, expansive sets including a Parisian riverfront (where Team America inadvertently destroys the Eiffel Tower), an Egyptian bazaar (where they blow the tops off a few pyramids and give the Sphinx a facelift following a desert car chase) and New York’s Times Square (which they brave in order to recruit the Broadway actor to replace a recently fallen agent). Technically, the film walks a tightrope, emphasizing the ridiculousness of the characters at every turn (just watch them walk, or talk, or kiss, or dance) while displaying real care and pride in the world they so zealously over-protect.

If there are numerous technical aspects to applaud, there are also some solid comedic notions half-buried in the avalanche of excess. I liked some of the stock personalities applied to the Team members, such as empath/psychic Sarah, aggressive jock Chris (introduced as “the finest martial arts expert Detroit has to offer”), and unflappable, martini-chugging Team leader Spottswoode, whose chair is in a constant state of dramatically rolling across the screen, sometimes upside down. I enjoyed how the Team used a vicious aerial dogfight above the Indian Ocean as an opportunity to discuss their feelings in between blasts. Kim Jong Il’s attempt to escape his palace in preparation for the inevitable sequel (think Austin Powers’ Dr. Evil) was clever, and the reveal of his deadly panthers had me laughing out loud. Was it enough, in the end? Just what the hell is Team America: World Police anyway?

Team America is the movie that first alerted us to the existence of the country Derka-Derkastan, that cast Matt Damon in the stealth role of Lenny from Of Mice and Men, and confirmed the fears of all – that puppets have bodily fluids too. Lots and lots of them, as it turns out. Parker and Stone’s trademark “One Size Fits All” sense of umbrage – parceled out during a time when the air was particularly thick with finely honed outrage flying in all directions – and their need to underline Team America’s incompetence, while flaying egotistical actors and generic terrorists in the same swipe, stands out as a mindset conspicuously lacking from Hollywood otherwise. Gary’s closing speech (in which he must upstage Baldwin, his acting idol) turns out to be a half-assed, wholly unnecessary justification of the preceding mayhem. It goes against the film’s established character, and rings more than a little hollow. I can’t see it, or the movie as a whole, as any sort of traditional political statement. Nevertheless, I imagine the masses have been dying to deliver just this sort of blind, giant middle finger to seats of power for years. I just wish it was a bit narrower in focus, and a good bit funnier. Team America swings for the fences – early, often, repeatedly – but instead hits one foul ball after another, before finally, and stubbornly, collapsing of exhaustion.