“Your ticket is torn. You may never return home.”

What the John Wick sequels have lacked in conventional story, they have more than made up for in sheer architecture, grafting additional layers of cold-blooded and/or cutthroat bureaucracy and attendant intrigue onto the original’s stylish if still fairly straightforward tale of revenge. Who knew the international hitman community required such substantial infrastructure to operate, or that the phrase “honor among thieves” translated so elegantly to professional killers as well? There are lots of moving parts in any John Wick sequel – a good many of them invisible, it turns out – and, whether airborne or spent, only (approximately) 70% are bullets. Seeing as the original presented him as a gun-toting tsunami in human form, the sequels, for their sometimes glaring flaws, have also been effective at ratcheting up Wick’s external threat level to a somewhat plausible sustained plateau of omnipresent, multi-directional incoming danger, by, first, suddenly flipping his role from that of the hunter to the hunted, and then, just as dramatically if not quite as conclusively, removing whatever hope he might have had of finding the kind of sanctuary that offers peace more than one minute at a time. In Chapter 3 alone, he is dropped repeatedly by punches and pedestrian hit-and-runs, falls off multiple buildings, is flung through a procession of plate glass display cases, is stabbed on several occasions and even loses an appendage, if, to my admittedly spotty memory, still never shot. This speaks to the 54-year-old Keanu Reeves’ believability as a stoic, bulletproof, death-dealing and basically indestructible Ginsu whirlwind, so I’m prepared to let it slide. Besides, there are the needs of Chapter 4 to consider. 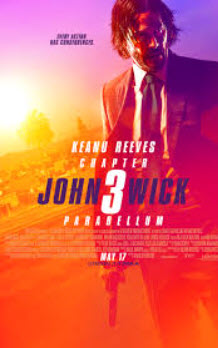 Such a ludicrous winning streak of continuing to breathe under the most extreme possible duress requires not just supernatural luck but surpassing skill, which, as the John Wick movies never stop emphasizing, he has in spades. Legend tells that he once dispatched three would-be assassins armed only with a No. 2 pencil, and that is but the sharpened tip of the kinetic carnage his filmed adventures have offered thus far. You might recall that Wick’s story began in earnest after it had should have technically ended, when Eurotrash trust fund wannabe gangster Theon Greyjoy made the mistake of stealing his car and killing the puppy with whom he’d bonded in the aftermath of his beloved wife’s untimely death, thus signing not only his own death warrant but those of the ocean of otherwise anonymous, bad-suited, “bald-n-stubbly” associates in his orbit. That, of course, was many, many, many bullets ago. Wick’s already burnished reputation seems to have only grown since the abrupt end of his retirement – being on camera tends to do that for you – leading almost inevitably by Chapter 3 to an embarrassing number of close encounters he’s able to survive in no small part by exploiting the incomprehensibly starstruck nature of the professional amateurs trying to kill him. These steely assassins talk too much in general, with the exception, of course, of our hero (and, apparently, theirs), who conveys as much meaning and intent in his most often repeated line – “Yeah” – as might any number of soliloquies off-Broadway. I can’t decide whether, as an actor, this is Reeves’ gift, or curse, or crutch, but it still works, kinda.

Chapter 3 opens already on the move, with Wick, having been gifted a one-hour head start before he is declared persona non grata by his employers and Wabbit Season officially opens for the dozens of enterprising if doomed hitmen competing to collect the $14 million bounty on his head, in full-on “running through the rain” desperation mode. This grace period was granted him by Winston (Deadwood’s Ian McShane, staking out performance territory in the fertile yet tonally tricky area between “flippant” and “merely droll”), friend, colleague, and administrator of infamous Manhattan luxury hotel The Continental – and one of several underworld kingpins with either lingering affection or a professional obligation that can be cashed in – who, upon receiving official notification that hell has been unleashed on the man, deadpans his odds at “50/50”. Wick, in a fit of rage, killed the most uninteresting villain in recent action cinema at the midpoint of Chapter 2, thus violating the sanctity of The Continental as a safe haven and raining down ruthless repercussions from “The High Table”, the Commission-lite governing body of professional hitmen worldwide, that spill over into Chapter 3 in first a downpour and then a flood. I remember writing admiringly in my review of the original John Wick of The Continental, a secret, secure, all-inclusive rest stop for the discriminating slayer on the go, though it was little more then than a clever and charming detail. I didn’t imagine the hotel would grow to become not just a setting but a plot device indispensable to the entire series, one we see so much of in Chapter 3 – the famous lounge, the crystal gallery, the shootout-ready atrium, the infamous/infinite gun vault – that it might as well be another character.

The world of hitmen is full of characters – fortunately, or else so much mayhem in rapid succession might risk growing numbing or dull – each existing as a less an individual than a direct counterpoint, however eccentric, to John Wick’s stoic minimalism. There’s the wonderful Lance Reddick, from whom no amount of thick West African dialect can erase the memory of The Wire’s Cedric Daniels, as The Continental’s unflappable, extremely helpful, deadshot concierge. Anjelica Huston provides an intriguing marker to Wick’s mysterious past as the imperious headmistress of the shadowy Belarussian performance athlete factory in which he was trained as a youngster. Hawaiian martial artist Mark Dacascos plays the babbling Wick fanboy charged with bringing him down, one imagines after first grabbing a selfie, and at least makes for a colorful “Big Bad” if not always a compelling one. As is often the case with action vehicles in which she features, Halle Berry almost hijacks the movie in her ten minutes of screen time, matching and then one-upping its star as a fellow killer elite from whom Wick asks a huge favor.* The aforementioned McShane and returning Laurence Fishburne, always welcome, each play kings of a personal domain – the former The Continental and the latter the gritty streets of Manhattan’s Bowery – with degrees of flamboyant arrogance suggesting their respective times on the throne may be limited. Concurring with this view is the “High Table” itself, personified by a no-nonsense emissary in a crew-cut and tailored business suit (Asia Kate Dillon, of Showtime’s Billions) in town to settle house business, reign in those whose senses of duty may have waned, and reestablish the clear pecking order.

*Her blitzkrieging pack of synchronized attack dogs is the ultimate not-so-secret weapon to turn the tide of any skirmish situation, not to mention a consistent highlight, in a hilarious, “holy shit” kind of way, in a movie that strains at comedy otherwise. I can easily foresee the whole crew returning, and, quite possibly, becoming regular series players going forward.

Standing in contrast to this rogues gallery is Wick himself, whose style is his very existence. Well, that and the black suit. Despite a potent, semi-permanent poker face and those mind-bending, ass-beating, preternatural skills – forever camouflaged until a second before it’s too late behind his lean, unassuming physical presence – his prevailing characteristic is an astonishing, unbreakable determination to survive. To what end he should exert such massive effort is less certain. Wick is freshly tortured each day by the loss of his wife, that much is clear. Forgive the devil’s advocacy, but, staggering if not buckling beneath the constant weight of this combined physical and emotional pain, who’s to say death might not be a relief? He has no traditional family, and no friends per se – only professional well-wishers and ill-wishers, many of whom, as mentioned, overlap – though he does have a cute new dog. Wick would be a fascinating character study if he wasn’t trapped in a vehicle that doesn’t have the patience or capacity to slow down for personal reflection. As it is, he is a generational talent unable to ever truly admire his work. I’m convinced that alone is what really keeps him going, this bottomless need to validate his reputation in real time. Despite regular lip service paid to the notion of retirement, or the need to keep his wife’s memory alive, the series has never focused on John’s personal stakes in anything but elliptical terms. With the completion of this makeshift trilogy, perhaps the time has finally come to really plumb his psyche or else turn the page? No?

John Wick Chapter 3 is obviously not the place from which to launch such inquiries. It’s too concerned with showing Wick trudging through a literal Arabian desert to worry about metaphorical ones, too busy orchestrating gunfights on horseback and swordfights from swarming motorcycles – both fairly amazing, as you’d expect – to ever turn its focus inward. Despite my prattle to the contrary, this is absolutely the right approach, for the moment and probably all time. I only mention all the ennui because it’s been a component of every Wick so far, albeit one with the equivalent substance of a painted storefront facade from a 1950s Western movie set. The best compliment I can pay veteran stuntman Chad Stelhanski, who has directed this series from its inception, is that he, predictably, has a great knack for slick, close-quarters action blocking that translates smoothly no matter how far out the camera zooms. His work is occasionally showy – and rightly so, dammit – but never obtrusive. He knows which way is up. You know the comically outsized warning label located above the command console in classic Looney Tunes cartoons that screams in 156-point font, “DO NOT PUSH THIS BUTTON!”, complete with multiple arrows helpfully, if hysterically, pointing out the exact area to avoid? John Wick is said button. No matter who might be doing the pushing, so doing will be both the stupidest and final mistake of a sharply abbreviated life. Luckily there exists for our entertainment an entire underground international subculture of courteous and clumsy hoodlums who simply, tragically even, cannot help themselves. John Wick Chapter 3: Parabellum runs every last one of them through the moody, monosyllabic blender that is its namesake with such verve and creativity that, even though it dances precariously on the line separating “exhilarating” from “exhausting” for at least its last third, it can’t help but be the best installment so far. Chapter 4 already has a lot to live up to.